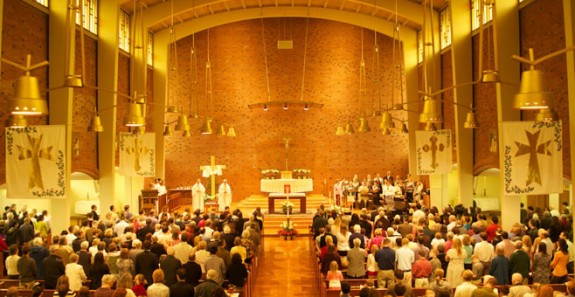 Earlier, I posted about parishes in Seattle that were declining to take part in the petition drive against same sex marriage.

Now, some reaction from the pews:

The congregation at Seattle’s Our Lady of the Lake Catholic Church gave the Rev.. Tim Clark a standing ovation Sunday when he announced that the parish would not gather signatures for a referendum to repeal same-sex marriage.

The parish became the sixth in Seattle to opt out of the petition drive for Referendum 74 that has been endorsed and foisted on parishes by Archbishop J. Peter Sartain.

“I am happy to report that Our Lady of the Lake parish-oners have been overwhelmingly and, thus far, unanimously supportive of the decision I made NOT to gather signatures in support of this Referendum,” Clark wrote in response to an e-mail.

“The standing ovation experienced during one of the Masses says less about me and much more about the health of this parish.  I only wished the archbishop could have experienced the sustained applause — the ‘sensus fidelium’ — of the people.  He needs to listen to this ‘voice.’ That is my prayer.”

In several parishes, pastors have said that gathering signatures against marriage equality would, in the words of the Rev. Michael Ryan of St. James Cathedral, “prove hurtful and seriously divisive in our community.”

Archbishop Sartain, in a letter that Clark will place in his parish bulletin next week, asked the Catholic faithful in Western Washington to support Referendum 74.

Opponents of marriage equality need to gather 120,577 valid voter signatures by June 6 to block the state’s new same-sex marriage law from taking effect and put the issue on November’s ballot.

The archbishop said that all persons “should be treated with respect, sensitivity and love,” but reiterated church teachings on sexuality that are eschewed by many American Catholics.

“It is important to remember that all Christians are called to chastity, and sexual intercourse is so intimate and significant that it is intended only for a man and woman in marriage,” said the letter, cosigned by Archbishop Sartain and Auxiliary Bishop Eusebio Elizondo.

“When I first read the archbishop’s letter I was troubled by the content and his intentions,” Clark wrote.  “In conscience, I could not allow signatures to be gathered, to allow the faith to be politicized in this way.

“What troubles me is the message this whole approach sends which I find discriminatory and insensitive.  To follow through with his wishes would be hurtful, divisive and a countersign to what we are trying to foster in this Catholic community in Wedgwood.

“I deeply believe, and say this with boldness, that this approach is not in the mind of Christ.”

Meantime, you can read the archbishop’s letter on Referendum 74, which will be inserted in parish bulletins, at this link.

April 17, 2012
What we have come to: brides choose radical ways to lose weight for The Dress
Next Post

April 17, 2012 Does he ever have a two-for-one sale on couplets?
Recent Comments
0 | Leave a Comment
Browse Our Archives
Follow Us!

Being Consumed:  A look at William T. Cavanaugh’s...
Being Consumed: Economics and Christian Desire is the second book by William...
view all Catholic blogs
What Are Your Thoughts?leave a comment