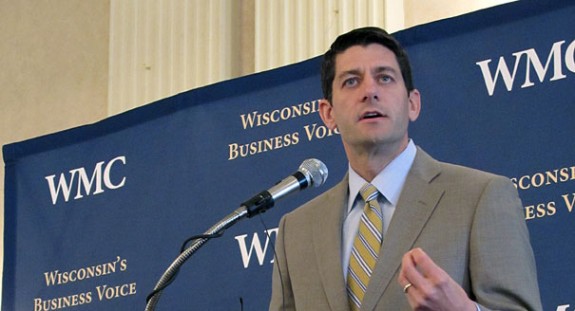 “A person’s faith is central to how they conduct themselves, in public and in private, so to me, using my Catholic faith, we call it the social magisterium, which is: How do you apply the doctrine of your teaching into your everyday life as a lay person?” he said.

Ryan said that the principle of subsidiarity — a notion, rooted in Catholic social teaching, that decisions are best made at most local level available — guided his thinking on budget planning.

“To me, the principle of subsidiarity, which is really federalism, meaning government closest to the people governs best, having a civil society … where we, through our civic organizations, through our churches, through our charities, through all of our different groups where we interact with people as a community, that’s how we advance the common good,” Ryan said.

The Wisconsin Republican said that he also drew on Catholic teachings regarding concern for the poor, and his interpretation of how that translated into government policy.

“[T]he preferential option for the poor, which is one of the primary tenets of Catholic social teaching, means don’t keep people poor, don’t make people dependent on government so that they stay stuck at their station in life, help people get out of poverty out onto life of independence,” said Ryan.

In 2011, after Ryan’s last budget proposal, the president of the U.S. Conference of Catholic Bishops, Timothy Dolan, commended the Republican’s “continued attention” to Catholic social justice “in the current delicate budget considerations in Congress.”

“The budget is not just about numbers,” Dolan wrote in a letter in May 2011. “It reflects the very values of our nation. As many religious leaders have commented, budgets are moral statements.”

Read more — including some dissenting opinion on Ryan’s views on subsidiarity.

And for more on the topic, there’s an interesting take at the Catholic Moral Theology website.
Comments closed.
Previous Post