Sisters turn to the Internet for vocations 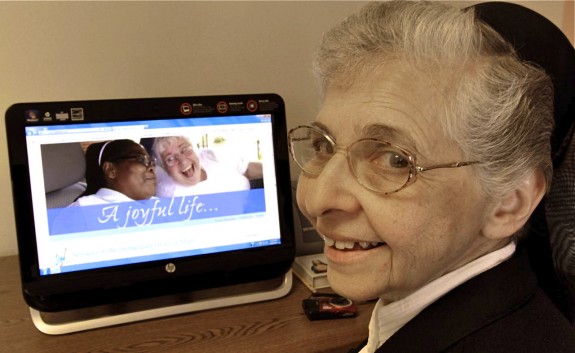 This being Vocation Sunday, it’s a good time to look at a vocation that is really struggling, religious sisters.  How can they attract new recruits?

When Sister Elaine Lachance devoted herself to a religious life straight out of high school in 1959, her religious order had more than a dozen convents in the U.S. with nearly 260 sisters.

Today, the Good Shepherd Sisters of Quebec, based in Canada, has just five convents in Maine and Massachusetts with 56 sisters. The youngest is 64 years old, and it’s been more than 20 years since a new member joined.

Rather than leave the future of the convents to prayer and chance, Lachance has turned to the Internet. She’s using social media and blogging to attract women who feel the calling to serve God and their community.

She says she had her awkward moments when she began using Facebook and writing blog posts.

“But I knew I had to go there, that I had to do it,” said Lachance, who turned 70 on Sunday. “You have to go where the young people are. And that’s where they are.”

The number of nuns and sisters has plunged through the decades as more career opportunities for women opened, parochial schools closed and sisterhood became less visible. Generally, a nun lives a cloistered, contemplative life in a monastery, while sisters live and work within their communities.

At one time, women would join the sisterhood through word of mouth or their personal interactions with sisters, said Lachance, vocation director for the Good Shepherd Sisters. But now, many younger women aren’t even aware it’s a choice.

For years, Lachance has visited Catholic schools, placed ads in religious publications and attended job fairs to recruit sisters. She’s still doing those things, but she has also turned to Facebook, her blog and YouTube. The order also updated its website and hired a public relations company.

It’s hard to sell somebody on committing to a religious life, with its vows of poverty, chastity and obedience, in today’s world of slick technology, fast cash and material goods, Sister Dorina Chasse said on a recent day at St. Joseph Convent, a home along the Saco River in Biddeford where elderly and sick sisters are taken care of.

“It’s hard for them to leave that,” Chasse said.

Still, there’s been an uptick among women showing an interest in pursuing a religious life, said Patrice Tuohy of the National Religious Vocation Council, a Chicago-based group representing vocation directors for religious organizations.

The NRVC launched a website called VocationMatch.com seven years ago that links young people interested in leading religious lives to religious communities. The site gets about 6,000 inquiries a year.

The Internet is useful for such questions because it offers instant information and is anonymous, Tuohy said.

“For a 20-year-old to think about joining a religious community is an unusual decision, not to mention countercultural,” she said. “Someone who’s thinking about taking a vow of poverty and chastity goes counter to a culture that promotes sex and money and power.”

April 28, 2012
What your commencement speaker won't tell you
Next Post

April 29, 2012 A liturgy that left me speechless -- UPDATED
Recent Comments
0 | Leave a Comment
Browse Our Archives
Follow Us!

The 4th of July and The End of...
The 4th of July has always been my favorite holiday. (Sorry Christmas...
view all Catholic blogs
What Are Your Thoughts?leave a comment