US bishops call for “fortnight for freedom” this summer to pray for religious liberty April 12, 2012 Deacon Greg Kandra 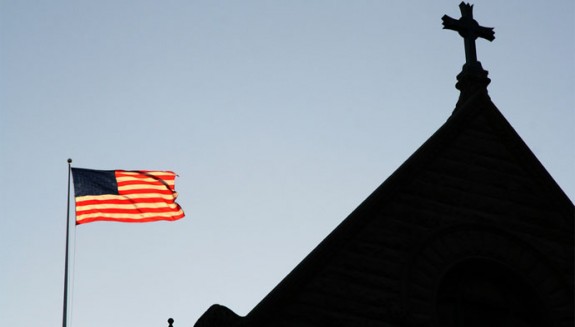 From the newly-released Statement on Religious Liberty:

Religious liberty is not only about our ability to go to Mass on Sunday or pray the Rosary at home. It is about whether we can make our contribution to the common good of all Americans. Can we do the good works our faith calls us to do, without having to compromise that very same faith? Without religious liberty properly understood, all Americans suffer, deprived of the essential contribution in education, health care, feeding the hungry, civil rights, and social services that religious Americans make every day, both here at home and overseas.

What is at stake is whether America will continue to have a free, creative, and robust civil society—or whether the state alone will determine who gets to contribute to the common good, and how they get to do it. Religious believers are part of American civil society, which includes neighbors helping each other, community associations, fraternal service clubs, sports leagues, and youth groups. All these Americans make their contribution to our common life, and they do not need the permission of the government to do so. Restrictions on religious liberty are an attack on civil society and the American genius for voluntary associations.

The Union of Orthodox Jewish Congregations of America issued a statement about the administration’s contraception and sterilization mandate that captured exactly the danger that we face:

Most troubling, is the Administration’s underlying rationale for its decision, which appears to be a view that if a religious entity is not insular, but engaged with broader society, it loses its “religious” character and liberties. Many faiths firmly believe in being open to and engaged with broader society and fellow citizens of other faiths. The Administration’s ruling makes the price of such an outward approach the violation of an organization’s religious principles. This is deeply disappointing.5

Both our civil year and liturgical year point us on various occasions to our heritage of freedom. This year, we propose a special “fortnight for freedom,” in which bishops in their own dioceses might arrange special events to highlight the importance of defending our first freedom. Our Catholic institutions also could be encouraged to do the same, especially in cooperation with other Christians, Jews, people of other faiths, and indeed, all who wish to defend our most cherished freedom.

We suggest that the fourteen days from June 21—the vigil of the Feasts of St. John Fisher and St. Thomas More—to July 4, Independence Day, be dedicated to this “fortnight for freedom”—a great hymn of prayer for our country. Our liturgical calendar celebrates a series of great martyrs who remained faithful in the face of persecution by political power—St. John Fisher and St. Thomas More, St. John the Baptist, SS. Peter and Paul, and the First Martyrs of the Church of Rome. Culminating on Independence Day, this special period of prayer, study, catechesis, and public action would emphasize both our Christian and American heritage of liberty. Dioceses and parishes around the country could choose a date in that period for special events that would constitute a great national campaign of teaching and witness for religious liberty.

In addition to this summer’s observance, we also urge that the Solemnity of Christ the King—a feast born out of resistance to totalitarian incursions against religious liberty—be a day specifically employed by bishops and priests to preach about religious liberty, both here and abroad.

To all our fellow Catholics, we urge an intensification of your prayers and fasting for a new birth of freedom in our beloved country. We invite you to join us in an urgent prayer for religious liberty.

Almighty God, Father of all nations,
For freedom you have set us free in Christ Jesus (Gal 5:1).
We praise and bless you for the gift of religious liberty,
the foundation of human rights, justice, and the common good.
Grant to our leaders the wisdom to protect and promote our liberties;
By your grace may we have the courage to defend them, for ourselves and for all those who live in this blessed land.
We ask this through the intercession of Mary Immaculate, our patroness,
and in the name of your Son, our Lord Jesus Christ, in the unity of the Holy Spirit,
with whom you live and reign, one God, for ever and ever. Amen.

April 12, 2012
The divorced Protestant who became one of California's most popular priests
Next Post

April 12, 2012 Another priest's thoughts on blessing kids in the communion line
Recent Comments
0 | Leave a Comment
Browse Our Archives
get the latest from
Catholic
Sign up for our newsletter
POPULAR AT PATHEOS Catholic
1

Threats vs. Science in Public Health Policy
NPR reports that the Biden administration is about to lay down vaccination...
view all Catholic blogs
What Are Your Thoughts?leave a comment