“Does she have cooties?”: Catholic school forfeits baseball game over girl on opposing team

A fundamentalist Arizona Catholic high school is refusing to play in a baseball final as their opponent’s team includes a girl on second base. 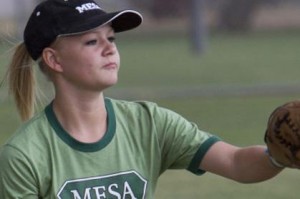 Our Lady of Sorrows Catholic school, in Phoenix, will forfeit the final rather than play against Mesa Preparatory Academy because 15-year-old Paige Sultzbach is on their team.

The fundamentalist Catholic school is run by the U.S. branch of the Society of Saint Pius X. The group represents conservative, traditional priests who broke from the Catholic Church in the 1980s.

The school’s statement read, “Our school aims to instill in our boys a profound respect for women and girls. Teaching our boys to treat ladies with deference, we choose not to place them in an athletic competition where proper boundaries can only be respected with difficulty.”

Paige’s mother Pamela responded by saying, “This is not a contact sport, it shouldn’t be an issue. It wasn’t that they were afraid they were going to hurt or injure her, it’s that they believe that a girl’s place is not on a field.”

The athletic director at Mesa Preparatory Academy said, “I respect their views, but it’s a bit out of the 18th century.”

The Mesa team coach said she was angry. She said “What true athlete would want to win or lose a championship game by forfeit?”

Lisa Maatz, director of public policy at the American Association of University Women, told AP that this was an example of why laws which enforce gender equality in education programs, including sports, are necessary.

She said, “The very idea that such stereotypes are so strong, they’d actually forfeit a game simply because a girl was on the field. That’s ridiculous…Does she have cooties?”

May 12, 2012
Kennedy widow to speak at Catholic commencement
Next Post

May 12, 2012 Homily for May 13, 2012: 6th Sunday of Easter
Recent Comments
0 | Leave a Comment
"I think I would have been happier had the CDF handled the nuns the way ..."
Theodore Seeber Vatican challenges “interpretation” of cardinal’s remarks ..."
"Blaming "Islamics" for this is like blaming the Pope for the Holocaust Denial of Hutton ..."
Theodore Seeber One killed, 44 injured in Catholic ..."
"It smacks to me of hyper-sensitivity, a veiled spiritual and intellectual pride, with regards to ..."
J D Pope Francis: “A Christian who complains, ..."
"Oh, no, we never change our mind, and we always agree, even on points of ..."
Ron Chandonia Vatican challenges “interpretation” of cardinal’s remarks ..."
Browse Our Archives
Related posts from The Deacon's Bench