LC leader admits he knew for years about Williams’ child

The leader of the Legionaries of Christ admitted on Tuesday he knew for years the scandal-plagued religious order’s most famous priest had fathered a child but still allowed the popular cleric to preach about morality. 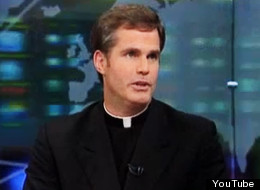 The religious order, still reeling from revelations that its founder was a sexual abuser and drug addict with two secret families, suffered another major blow last week when it admitted that Father Thomas Williams, an American based in Rome, had also led a double life.

But the question that had been left hanging after the first admission was how long Williams’ superiors knew.

In a letter to members published on the order’s website, Father Alvaro Corcuera said he found out about Williams’s child “early in my new assignment” as the order’s director-general, which began in 2005.

In an interview with Reuters last week, Cardinal Velasio De Paolis, the man Pope Benedict appointed in 2010 as his personal delegate to try to reform the order, said he did not find out about Williams’ affair until this year.

Williams himself has released a statement:

My dear brothers and sisters in Christ,

I am sure you have all been shocked and disheartened by the news this week. I want each of you to know how sorry I am for my bad example and for the damage that will come from this for the Church and the Movement. Many of you have written me messages of encouragement and understanding, promising your prayers. I am so grateful to you for this undeserved outpouring of the truest Christian charity and mercy.

I also think it is important to clarify something that is surely bothering some of you regarding my public ministry over the past years. My superiors did on numerous occasions encourage me to keep a low profile, and I pushed to keep up a more active public apostolate. I foolishly thought that I had left this sin in my past, and that I could make up for some of the wrong I had done by doing the greatest good possible with the gifts God has given me. This was an error in judgment, and yet another thing I must ask your forgiveness for.

Please be assured of my prayers for all of you in this difficult moment of our history, to which I have contributed. Please remember me in prayer as well.

Yours in Christ and the Movement, Fr Thomas Williams, LC

Comments are closed.  Instead of commenting, please pray for all concerned.

May 22, 2012
Now I won't feel so bad when people yawn during my homilies
Next Post

May 22, 2012 Hail, Mary: Israeli actress Odeya Rush to play Mary in "prequel to 'Passion of the Christ'"
Browse Our Archives
get the latest from
Catholic
Sign up for our newsletter
POPULAR AT PATHEOS Catholic
1