As I said on a Facebook page devoted to him, “If you look up mensch in any dictionary, you’ll see a picture of Michael.”

A great colleague, journalist, producer and, yes, mensch has died far too young, at 64, from a brain tumor.  It was my good fortune to have the office next to his at “60 Minutes II,” and he was a frequent visitor — wandering in, often in his stocking feet, trying to find a place to kill time, blow off steam, gossip, fume, vent, daydream or just procrastinate while working on what would inevitably turn out to be a superb, often unforgettable piece.

From the CBS obit: 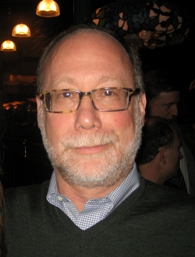 Michael Rosenbaum, an award-winning CBS News producer who was Tel Aviv bureau chief during the First Palestinian Intifada and produced stories for all of the News division’s broadcasts over a 27-year career with CBS, has died. He was 64 and died at home in Manhattan last night (17) of a brain tumor diagnosed last September.

“Michael was a great friend to so many of us at CBS News. He was a real newsman who was naturally curious and skeptical of almost everything. He was also fun to be around, a caring friend, and a beloved member of our family at CBS News,” said CBS News Chairman and 60 MINUTES Executive Producer Jeff Fager, who worked with Rosenbaum for many years. “He died way too young. We will miss him and everything about him very much.”

Rosenbaum was best known for his collaborations with correspondents Bob Simon and Dan Rather on breaking stories in the Middle East while he was bureau chief in Tel Aviv from 1989 to 1995. His field producing was a critical part of the CBS News coverage of the assassination of Israeli Prime Minister Yitzhak Rabin in 1995, which won the Peabody award and two Emmy awards.

“He was one of the very few people I’ve known who didn’t have a single illusion about himself; not a trace of egotism or narcissism,” said Simon “What I don’t think he knew and what I hope he realized over the last six months, is how many friends he had, how many of us loved him. Michael tried to conceal his loving, compassionate nature beneath a crusty exterior. He never quite succeeded.”

His skills and experience eventually earned him a role as a news magazine producer for 60 MINUTES and “60 Minutes II,” where he produced for Simon, Rather and each of the correspondents on the two broadcasts for 13 years. During this period, Rosenbaum also spent a year at the CBS EVENING NEWS as a senior producer.

He broke news in 2001 with a “60 Minutes II” interview of the brother of convicted Cold War spy Ethel Rosenberg, who said he lied in testimony that helped send his sister to the electric chair. The story won Rosenbaum his fourth Emmy.

He won his first Emmy for a SUNDAY MORNING story he produced with Simon in Saudi Arabia in late 1989. In the region to set up a temporary bureau to cover the imminent Persian Gulf War, Rosenbaum and Simon produced a thoughtful feature about green U.S. troops and their Vietnam-veteran trainers on the eve of war. The story won the Emmy for Outstanding General Coverage of a Breaking News Story.

There’s more at the link.

He Who makes peace in His heights, may He make peace, upon us and upon all Israel. Now respond: Amen.

May 18, 2012
RAW VIDEO: Sebelius gets heckled at Georgetown, but then gets cheered
Next Post

May 18, 2012 May 19, 2007
Recent Comments
0 | Leave a Comment
"I think I would have been happier had the CDF handled the nuns the way ..."
Theodore Seeber Vatican challenges “interpretation” of cardinal’s remarks ..."
"Blaming "Islamics" for this is like blaming the Pope for the Holocaust Denial of Hutton ..."
Theodore Seeber One killed, 44 injured in Catholic ..."
"It smacks to me of hyper-sensitivity, a veiled spiritual and intellectual pride, with regards to ..."
J D Pope Francis: “A Christian who complains, ..."
"Oh, no, we never change our mind, and we always agree, even on points of ..."
Ron Chandonia Vatican challenges “interpretation” of cardinal’s remarks ..."
Browse Our Archives
get the latest from
Catholic
Sign up for our newsletter
POPULAR AT PATHEOS Catholic
1

Penal Laws Against American Catholics: 1606-1789
[the first part below is an abridged version of Part IV of...
view all Catholic blogs
What Are Your Thoughts?leave a comment