Seminary numbers highest in over 20 years 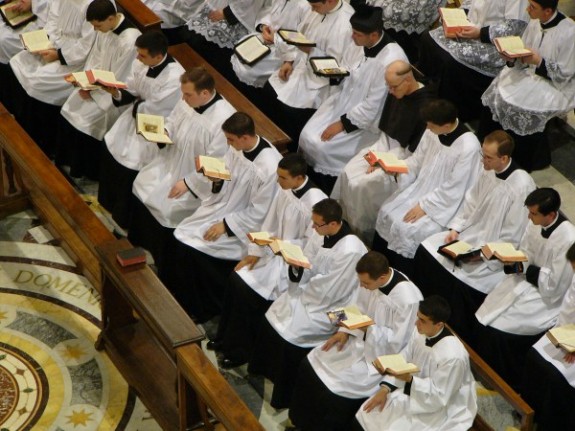 U.S. Catholic seminary enrollment in theology this year is the highest in almost a quarter-century, the Center for Applied Research in the Apostolate reported in the spring issue of its quarterly newsletter, The CARA Report.

The reported growth in seminarians, however, does not begin to match the growth in the U.S. Catholic population, which has increased by about 25 percent in that time period.

“During the academic year 2011-12, enrollment increased by 63 diocesan seminarians and religious enrollment by 52 seminarians” over the 2010-11 figures, the report states.

CARA, based at Georgetown University in Washington, D.C., has been reporting yearly enrollment figures and other data on U.S. Catholic seminaries and seminarians since the 1967-68 academic year.

At that time, there were more than 8,000 seminarians studying theology, more than 13,400 students in college seminaries, and almost 16,000 high school seminarians.

CARA said the current year’s total of college seminarians was down 105, or 7 percent, from the previous year, and high school enrollment dropped by 84, or 16 percent.

The lower high school and college figures reflect long-term U.S. Catholic cultural trends toward later vocational discernment that CARA and other sociologists of religion have been analyzing and discussing for many years.

May 11, 2012
BREAKING: Vatican investigating Legion of Christ priests for sexual abuse
Next Post

May 11, 2012 Married deacons: it's okay. You can have sex with your wives.
Recent Comments
0 | Leave a Comment
"I think I would have been happier had the CDF handled the nuns the way ..."
Theodore Seeber Vatican challenges “interpretation” of cardinal’s remarks ..."
"Blaming "Islamics" for this is like blaming the Pope for the Holocaust Denial of Hutton ..."
Theodore Seeber One killed, 44 injured in Catholic ..."
"It smacks to me of hyper-sensitivity, a veiled spiritual and intellectual pride, with regards to ..."
J D Pope Francis: “A Christian who complains, ..."
"Oh, no, we never change our mind, and we always agree, even on points of ..."
Ron Chandonia Vatican challenges “interpretation” of cardinal’s remarks ..."
Browse Our Archives
Follow Us!