This may be a first: archbishop preaches in Rome basilica from an iPad

Being a bishop means being no stranger to debates and challenges, but also knowing the joy of sharing the faith, said Archbishop Thomas G. Wenski of Miami. 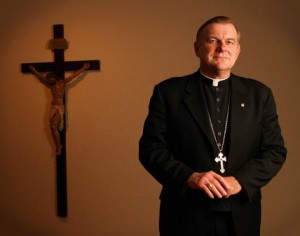 “We know a little bit about controversy and dissension, but like (St.) Paul we know also the joy not only of having encountered the Lord, we also know the joy of sharing him with others,” he said.

The archbishop was the homilist May 9 at a Mass at Rome’s Basilica of St. Paul Outside the Walls. He and other bishops of Florida, Georgia, North Carolina and South Carolina were joined by dozens of pilgrims from the region, including a violinist, trumpet player, organist and cantor from the Archdiocese of Miami.

The Mass was part of the bishops’ “ad limina” visits to Rome and the Vatican.

In his homily, which he read from his iPad since he said he did not have a printer available, Archbishop Wenski said the “ad limina” visits are an occasion to consult with Pope Benedict XVI and top Vatican officials, but even more they are an opportunity for the bishops to reaffirm their faith and strengthen their unity.

May 9, 2012
The Prayer of Blessing for a Child in the Womb
Next Post

May 10, 2012 Meet the priest serving "the most reviled congregation in the country"
Recent Comments
0 | Leave a Comment
"I think I would have been happier had the CDF handled the nuns the way ..."
Theodore Seeber Vatican challenges “interpretation” of cardinal’s remarks ..."
"Blaming "Islamics" for this is like blaming the Pope for the Holocaust Denial of Hutton ..."
Theodore Seeber One killed, 44 injured in Catholic ..."
"It smacks to me of hyper-sensitivity, a veiled spiritual and intellectual pride, with regards to ..."
J D Pope Francis: “A Christian who complains, ..."
"Oh, no, we never change our mind, and we always agree, even on points of ..."
Ron Chandonia Vatican challenges “interpretation” of cardinal’s remarks ..."
Browse Our Archives
Related posts from The Deacon's Bench

Parents in Conservative Churches with LBGTQIA+ kids--Change Churches,...
I didn’t comprehend how serious the related problems were with the LBGTQIA+...

Are Journalists Failing People of Faith?
Have you felt ignored by the media as a person of faith?...
view all Catholic blogs
What Are Your Thoughts?leave a comment