Last night, I had the great privilege of serving as deacon alongside Bishop Christopher Coyne as he celebrated Mass for the Catholic Media Conference in Indianapolis.  His excellent homily focused a great deal on Christian aspects of communication, and prompted a lot of enthusiastic comment at the dinner afterwords.  Here’s a key part: 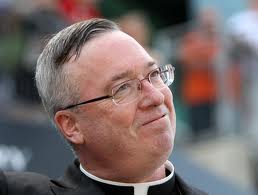 As one who is missioned with you, I would like to offer a four simple points  of advice that arise from my time as spokesperson for the Archdiocese of Boston and my present role as a bishop that I have found helpful in directing the way in which I use public communications.  These are not exhaustive or hard or fast rules.  They are more musing than anything else.  But I find them helpful in fulfilling the prophetic role of being a good Catholic communicator.

First, always take the high road.  By this I mean, always be polite, never respond in kind, do not making anymore enemies than one already has in these matters, and most importantly don’t send an angry email written completely in capital letters until you’ve slept on it overnight.  Always taking the high road places us in a higher place.  I really think this is the way of Christ.  I’m reminded of yesterday’s gospel in which Jesus said, “when someone strikes you, give them your other cheek.”  There is already too much invective and anger out there.  Let’s not add to it.  In addition, by taking the high road one avoids allowing those opposed to one’s position from going on the “ad hominum.”  For example, when an American bishop responded with a somewhat sarcastic column of his own to an editorial in America magazine that criticized the USCCB for its position on the HHS mandate, the response was immediate but not in the way he hoped.  Instead of responding to the very valid points he raised, critics almost unanimously chastised him for the tone of his response with comments like, “Isn’t it terrible that a bishop would respond with sarcasm.”

Second point: Stay on topic. Stay on topic. Stay on topic.  This absolutely applies to answering media questions but it also applies in the greater scheme of life.  And what might that topic be for us applied to our lives? “That God the Father so loved the world that he gave us his only begotten Son that whoever should believe in Him might have eternal life.” Now I know that in the particular sense concerning much of what we do the specific topic varies from one story or moment to the next.  But in the grand scheme of things as Catholic communicators isn’t the overall topic the life, death, and resurrection of Jesus Christ and what that means for the world?  Staying on this topic really does allow us to keep our actions and words directed towards Him.

Point three, and this probably goes with “take the high road” but I think it is enough of a variation to say it.  When you are in the midst of any task, ask yourself, “Is what I am doing building up or tearing down?”  In asking this question I think of St. Paul’s admonition in Ephesians to “say only the good things men need to hear, things that will really help them.” Now that doesn’t mean that we don’t speak the truth to evil or sin.  Jesus himself was quite outspoken in his attacks on hypocrisy and sin.  In that sense we are building up by tearing down, when we tear down evil and replace it with the good.  But my admonition is more to avoid at all times the “attack ad” mentality that sadly permeates much of our public discourse today.  One way in which this plays out positively is trying to communicate as much as we can what it is we are “for” rather than what we are “against.”

Finally, my last point: I offer a special saint in the teachings and person of one of the great doctors of the Church, St. Terese of Liseaux and her “little way” for us communicators who serve the prophetic mission of the Church.  I would like to see her become the patron saint of the new social communications because she offers in her “little way” a way for us to keep our work in focus.  In her “Little Way”she tells us to first live out our days with confidence in God’s love and to recognize that each day is a gift in which one’s life can make a difference by the way you choose to live it. Out of this comes the admonition to see every little task or moment in life as an opportunity to make concrete the love of God.  Think about that in terms of what we do.  Every news story, every video, every blog post, every tweet or email or response to comment boxes can become an opportunity to manifest God’ love if we commit ourselves to loving.  I will love God and others in the little moments of my work.  I will spread the good news through one kind act, one loving response, one at a time, in the name of Christ.  I choose to communicate that love right now in this moment and in the concrete and isn’t that truly speaking the truth of God’s love as prophets named by God, missioned to the kingdom, and empowered by the Spirit of love.

June 21, 2012
Worth a thousand words, Fortnight edition
Next Post

We Should Treat Autistics Like Jesus Treated Lazarus...
I was invited to give the homily at all the Masses this...
view all Catholic blogs
Copyright 2008-2020, Patheos. All rights reserved.