It’s true: it don’t rain there in the summertime

When I arrived in Indianapolis for the 2012 Catholic Media Conference, one of the prevailing prayers I heard again and again was for rain. The region has been battling drought. The ground was parched. Grass was brown. The air was hot. But the city was in good spirits and did a fine job of rolling out the red carpet for the assorted writers, editors, bloggers, communications specialists, bishops and various hangers-on who make up, God love ’em, the Catholic press. 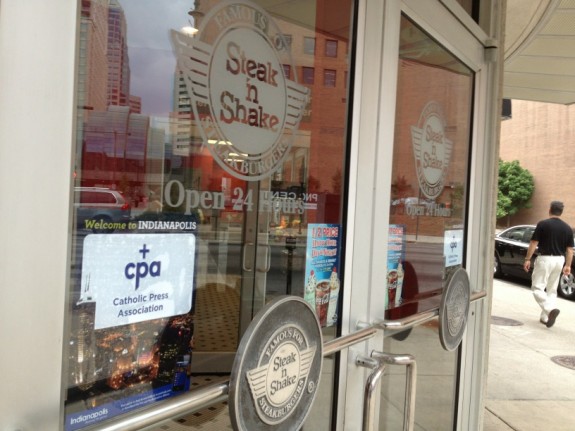 The location for the event was the Crowne Plaza at Union Station: a spectacular old building with an even more spectacular Grand Hall, which was the setting for all our meals, many presentations, and the Catholic Press Association awards gala dinner Friday night. 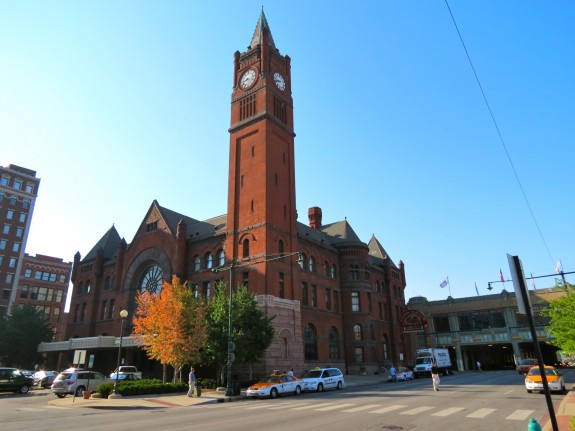 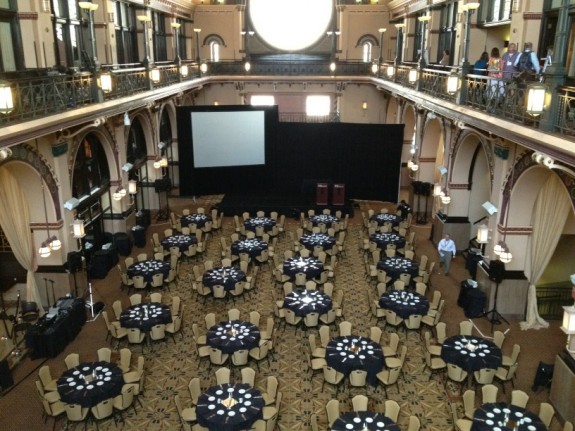 Mass was celebrated every evening at the nearby St. John the Evangelist Church — the oldest one in Indianapolis, and a beautifully maintained gem in the heart of the city.  The young pastor there, Fr. Rick Nagel, is doing great things with young adult ministry.  I got the chance to meet him one day before Mass and I’m pleased to consider him a new FOB (Friend of the Bench). 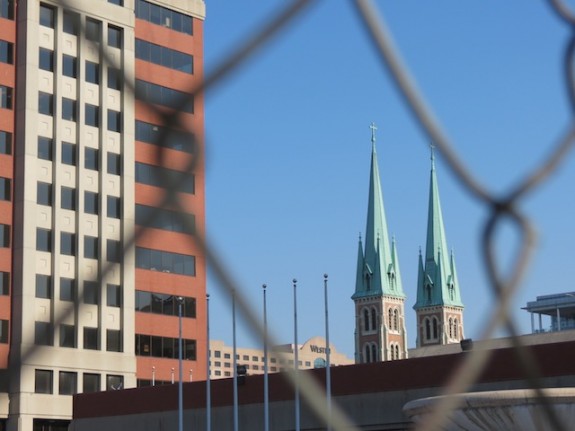 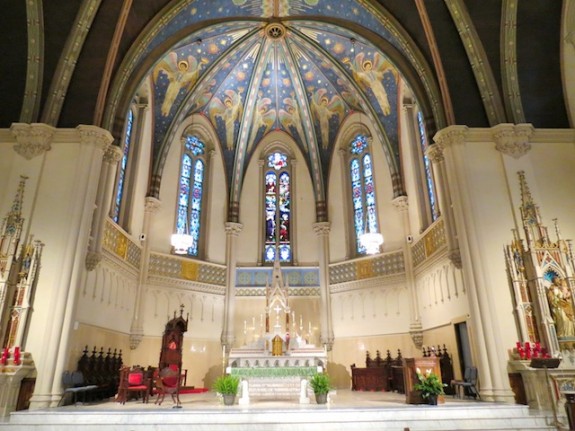 But much of the conference time was spent attending panels, presentations and talks. One of the best was by the perpetually spunky Lisa Hendey, the genius behind CatholicMom.com, and a tireless missionary for anything regarding social media. She rocks. 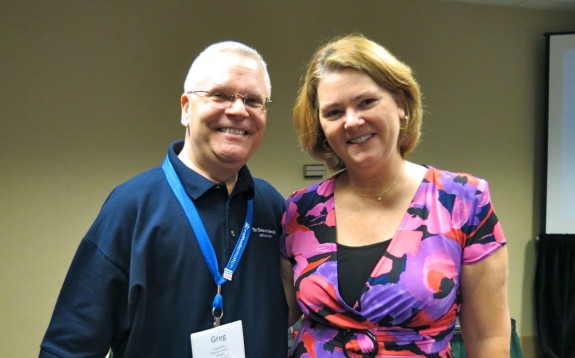 Another panel was put together by my boss, the Vice President for Communications at CNEWA Michael LaCivita. In two presentations, his group discussed the meaning and impact of Arab Spring, and the plight of Christians in the Middle East. 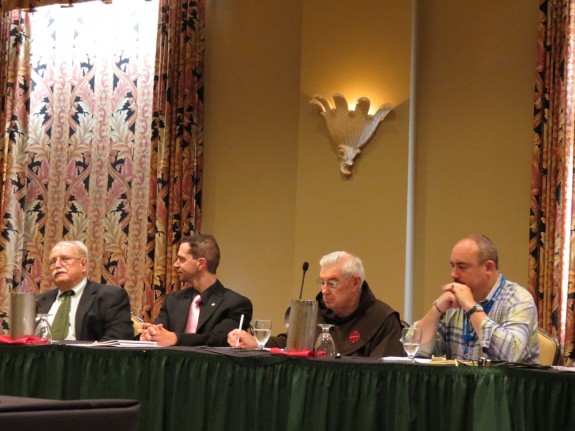 The hotel was packed with exhibitors — everyone from EWTN to Magnificat was there, offering lots of free swag. Press people love swag. I brought home oodles of pens — and one of these foam thingies, courtesy the Catholic News Service booth. 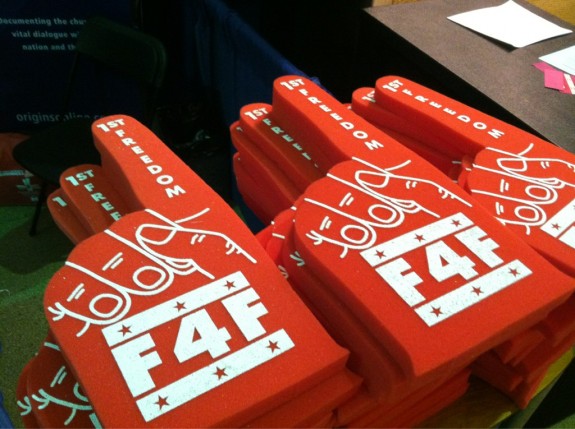 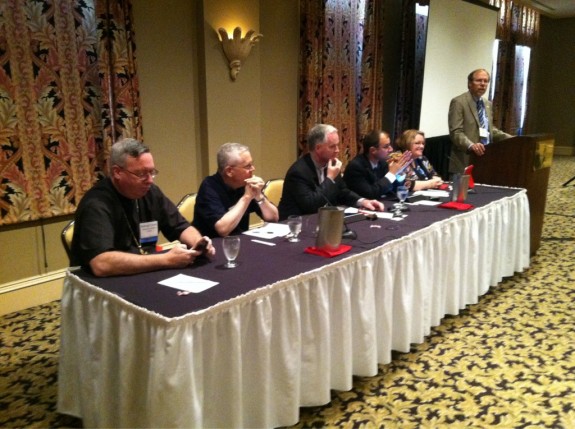 …and then, in the evening, there was the Catholic Press Association awards, the grand finale to the whole shindig. CNEWA and ONE did not come home empty-handed. The magazine and staff were honored with 19 awards, including First Place/General Excellence for Mission Magazines, and First Place for Best Online Blog. My boss and I took the news like the straight-faced stoics we are. 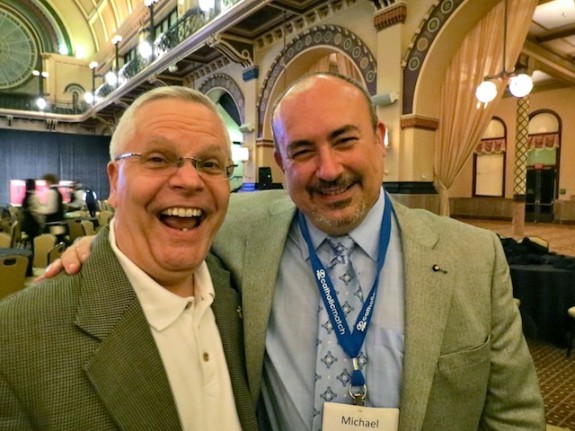 A good time was had by all.

It was inspiring to meet so many Catholic communications professionals, bringing to their work both a love for the media and a love for the gospel. We got to hear trenchant talks from people like Bishop Christopher Coyne and Archbishop Claudio Maria Celli. I had a grand time quaffing an Irish coffee in the bar with my old friend The Anchoress — I knew her long before she took the veil —  and I had a blast rubbing elbows with the likes of Brandon Vogt, Matt Palmer and Matthew Warner, the visionary young whipper-snappers who are transforming Catholic media right before our eyes.

Indianapolis may be feeling dry — but based on what I saw and experienced this week, there’s no drought these days in Catholic media, where every day brings new brainstorms.

Keep an umbrella handy. You never know when another one might hit.

June 24, 2012
Parishioners gather to "hug" their church in the face of parish merger
Next Post

June 25, 2012 Rubio on "Meet the Press" says he felt "called" to be Catholic
Browse Our Archives
Follow Us!