Rare father and son priest ordination set for this Saturday

I got the following e-mail press release today from the Anglican Ordinariate’s Susan Gibbs, and there’s at least one compelling detail worth noting:

Six former Episcopal priests from the Fort Worth area, including a father and son, will become part of history when they are ordained Catholic priests together on June 30.

The six are part of the first ordination class for the new Catholic Ordinariate of the Chair of St. Peter. Based in Houston, the ordinariate is equivalent to a diocese, but national in scope. It was created earlier this year by Pope Benedict XVI for Anglican groups and clergy in the United States seeking to become Catholic while retaining elements of their Anglican heritage.

And regarding the father and son: 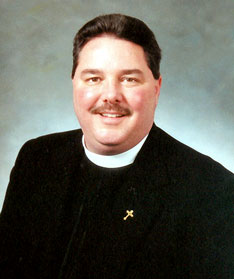 Charles Hough, III, 57, of Granbury, was an Episcopal priest for 31 years, including 18 years as Canon to the Ordinary of the Episcopal Diocese of Fort Worth before he stepped down in September 2011 to become Catholic. A graduate of the University of Texas and Nashotah House Seminary in Wisconsin, he was rector of two parishes in the Fort Worth area from 1982 to 1993. He currently leads St. John Vianney Catholic Ordinariate Community, which meets at St. Frances Cabrini Catholic Church in Granbury, and is online at stjohnvianneycleburne.org. Married for 39 years, he and his wife, Marilyn, have two children and two grandchildren. Their son, Charles IV, also is being ordained. 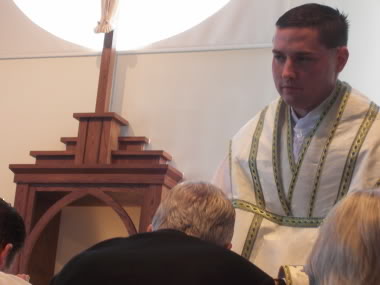 Charles Hough, IV, 30, of Keller, was ordained an Episcopal priest in 2007 and was rector of St. Paul’s Episcopal Church until entering the Catholic Church in June 2011. He is a graduate of Texas A&M and received a Master of Divinity from Nashotah House Seminary. He served on the adult religious education staff at St. Elizabeth Ann Seton Catholic Church in Keller, Texas and, starting July 1, will be pastor of Our Lady of Walsingham Ordinariate Parish in Houston, Texas. Married for eight years, he and his wife Lindsay have two young sons.

Remarkable?  I think so.  Keep all these men and their families in your prayers.  You can find out more about doings in the Anglican Ordinariate at its website: the Personal Ordinariate of the Chair of St. Peter .