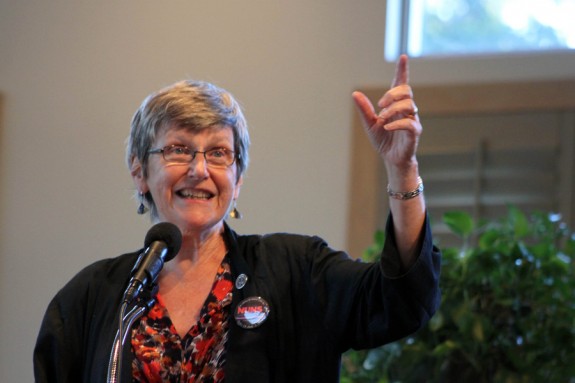 I was on the highway when I first heard about the Supreme Court’s healthcare decision, riding with the other “Nuns on the Bus.” We were watching CNN coverage, dejected by the initial (erroneous) report that the Affordable Care Act had been overturned. And then, after NETWORK’s Communications Coordinator called us with the correct information, we cheered!

My immediate reaction: elation mixed with relief and a sense that riding beside me were the hundreds of people I had met during our bus journey–people who, like me, would be directly impacted by this historic decision.

As Executive Director of NETWORK, A National Catholic Social Justice Lobby in Washington DC, I had been actively engaged in lobbying Congress for the Affordable Care Act as it moved through Congress. For example, I had written the “nuns’ letter,” signed by the leaders of many Catholic Sisters just before the congressional vote. (Many had credited that letter with playing an important role in getting the bill passed.)

I wrote the letter not just because of my personal beliefs, but because access to healthcare had been an integral part of my organization’s mission since our founding four decades ago by 47 Catholic Sisters. Simply put, we see healthcare access as a fundamental human right. This law saves lives, a sacred obligation.

More recently, NETWORK had been instrumental in organizing another group of Sisters to sign on to an amicus brief to the Supreme Court in support of the Medicaid extension provisions. We also marched and prayed in front of the Supreme Court steps while the hearing was going on.

Being on the road when the healthcare decision was announced was perfect. Why? Because throughout our travels we “nuns on the bus” had connected with hundreds of people who brought home the human impact of decisions made in Washington.

June 29, 2012 Michelle Obama makes the Catholic case against the HHS mandate?!
Browse Our Archives
get the latest from
Catholic
Sign up for our newsletter
POPULAR AT PATHEOS Catholic
1