Wallenda credits his faith for his historic walk above Niagara Falls 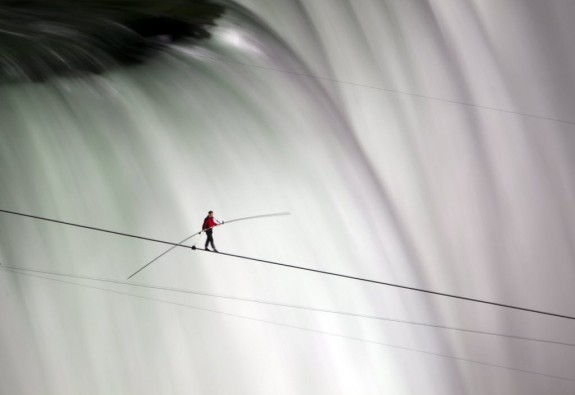 Those who saw this last night couldn’t help but be awed — and slightly terrified — at what was unfolding.  But in interviews after, a cheerful Nik Wallenda gave full credit to God and prayer for this astounding feat.  It’s something he’s spoken about candidly in the past:

Wallenda told reporters it took “a lot of praying, that’s for sure. But, you know, it’s all about the concentration, the focus, and the training.”

QMI Agency reported earlier on the details of Wallenda’s faith.

The King of the Wire puts his faith in the King of Kings.

Just before Nik Wallenda steps onto the wire tonight in an attempt to become the first person to walk a tightrope across the mouth of the Horseshoe Falls, he’ll form a circle with a dozen close friends and members of his close-knit Christian family and they’ll say a prayer to Jesus Christ.

The cross Wallenda wears around his neck every time he walks on a wire isn’t just a fashion statement, it’s a message about the religious beliefs the American performer holds close to his heart.

“I grew up in a born-again Christian family. A Bible-believing, God-fearing family. That’s the way I was raised and I find comfort and peace in that,” he said.

The Toronto Star has these details from tonight’s walk.

His wife and three children held hands and prayed with him minutes before he began. They were there when he reached the end. His engineer uncle perched close at hand; he was a key player in making the stunt happen.

…Moments before strapping on the harness, the daredevil joined hands in riverside prayer with wife Erindera — an eighth-generation wire walker herself; Nik proposed on a wire — and their three children Yanni, 14, Amadeus, 11 and Evita, 9. Prayer comes easily to Nik, a born-again Christian, who thanked God and Jesus out loud — and through his microphone to the world — for much of his 25-minute feat.

I think there’s a homily in there somewhere.

June 16, 2012 Worth a thousand words: baptism!
Browse Our Archives
get the latest from
Catholic
Sign up for our newsletter
POPULAR AT PATHEOS Catholic
1