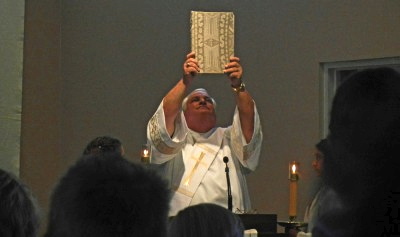 It’s exceedingly rare for a deacon to hold elected office, but a paper in California looks at one who does:

Over the last 10 years, the number of deacons in the Los Angeles archdiocese has more than doubled, increasing from about 160 in the early 2000s to 347 this year, including 14 deacons ordained last weekend.

And there’s only one deacon in the county – and possibly the state – involved in politics, Downey Councilman Mario Guerra, who celebrated his 10-year anniversary as a deacon on June 3 at St. Raymond Catholic Church in Downey.

When he addressed the crowd the day of his anniversary, he took the time to describe the office.

Priests are priests, he said. Deacons are something altogether different.

Guerra’s road to becoming a deacon wasn’t a smooth one. His family came to the United States as exiles from Cuba when he was a child. As a boy, he was interested in his faith, but he wasn’t very active as an adult.

Then in 1979, his brother and a few of his family members died in a plane crash as they tried to fly to Catalina Island.

Guerra was supposed to be on the plane, but he stayed behind to coach a Little League game.

He wondered why a good god would take away his brother, and he almost completely lost interest in his faith. For 14 years, he stayed out of church.

After he got remarried in the 1980s, his children and his wife attended church every Sunday while he stayed home to watch football.

One day his son had a question.

“Hey dad, don’t you believe in God?” his son asked.

Guerra said he did.

“How come we go to church to thank God, and you don’t?” his son asked.

As he became more involved, he considered becoming a deacon. He prayed and thought about it for year, and then he and his wife Ann began going to school on Saturdays to learn what being a deacon was all about. Guerra was ordained in 1992. The whole process lasted five years.

There’s much more at the link. Also, if the church and town seem vaguely familiar, it’s the parish that staged this Eucharistic flash mob.

N.B. For those who are wondering: there’s a section of Canon Law on clergy and politics:

Can. 285 §1. Clerics are to refrain completely from all those things which are unbecoming to their state, according to the prescripts of particular law.

§2. Clerics are to avoid those things which, although not unbecoming, are nevertheless foreign to the clerical state.

§3. Clerics are forbidden to assume public offices which entail a participation in the exercise of civil power.

§4. Without the permission of their ordinary, they are not to take on the management of goods belonging to lay persons or secular offices which entail an obligation of rendering accounts. They are prohibited from giving surety even with their own goods without consultation with their proper ordinary. They also are to refrain from signing promissory notes, namely, those through which they assume an obligation to make payment on demand.

Can. 286 Clerics are prohibited from conducting business or trade personally or through others, for their own advantage or that of others, except with the permission of legitimate ecclesiastical authority.

Can. 287 §1. Most especially, clerics are always to foster the peace and harmony based on justice which are to be observed among people.

§2. They are not to have an active part in political parties and in governing labor unions unless, in the judgment of competent ecclesiastical authority, the protection of the rights of the Church or the promotion of the common good requires it.

June 16, 2012 Wallenda credits his faith for his historic walk above Niagara Falls
Browse Our Archives
get the latest from
Catholic
Sign up for our newsletter
POPULAR AT PATHEOS Catholic
1