Absolution at Gettysburg: the story of Fr. William Corby 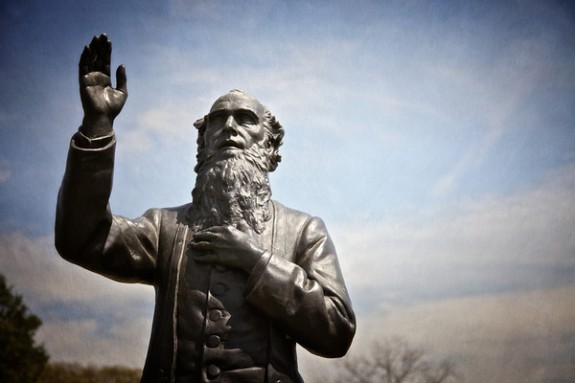 A fascinating and timely piece by the good doctor, Pat McNamara:

On the hot afternoon of July 2, 1863, the Union Army’s Irish Brigade, a unit composed predominantly of Catholic immigrants, waited for the order to go into action. It was the second day of the Battle of Gettysburg, a three-day conflagration that saw over 50,000 casualties between both sides. The previous day, Robert E. Lee’s Confederates had driven the Union troops through the town of Gettysburg onto a hill called Cemetery Ridge. Now, Lee strove to dislodge them from their stronghold and destroy the Union Army.

Just before the Irish Brigade went into the fight, its chaplain, Father William Corby, climbed up onto a boulder to give the men general absolution from their sins. Since there was no time for individual confession, he talked briefly about patriotism, bravery, and penance before pronouncing the formula. About 320 of the brigade’s 530 men fell in the wheat field that day, but the tide was turning in favor of the Union.

There are numerous statues on the Gettysburg battlefield, but only one is dedicated to a chaplain. In 1910, alumni of the University of Notre Dame, where Corby had been president, erected a statue of him giving absolution. The event has also been commemorated in paintings, poems, books, and film. “It’s a symbolic depiction of the bond between Catholic faith and American patriotism at the nation’s supreme moment of crisis,” wrote Civil War historian Lawrence Kohl.  Corby symbolized Catholic commitment to the Union.

July 2, 2012
Muller and deacons: “Only a man can represent this relation of Christ with the Church”
Next Post

July 2, 2012 Just in time for vacation season: hotel swaps the Bible for Kindle
Browse Our Archives
get the latest from
Catholic
Sign up for our newsletter
POPULAR AT PATHEOS Catholic
1

School district 214, school reopenings, transparency, and trust
Let's start with the fact that I've written on the topic of...
view all Catholic blogs
Copyright 2008-2020, Patheos. All rights reserved.