Just in time for vacation season: hotel swaps the Bible for Kindle 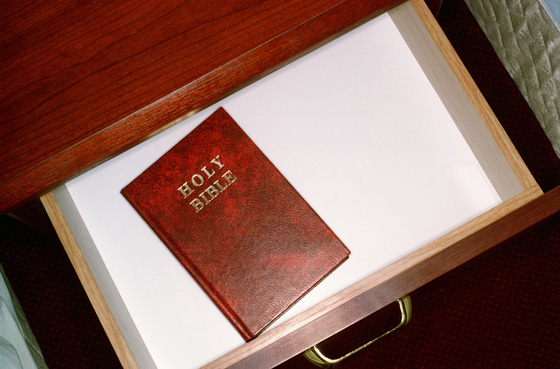 Ladies and gentlemen, the future is here (or, at least, in Britain):

From today, all 148 rooms at the Hotel Indigo will contain a Kindle e-reader pre-loaded with a copy of the Bible. The hotel is claiming to be the first in Britain to offer such a service.

Guests are also permitted to download a copy of any other religious text – to the value of £5 or less – during their stay. Regular fiction books can also be purchased, with the costs added to guests’ bills.

The policy is being adopted on a trial basis, until July 16, after which a decision will be made on whether to retain it in Newcastle, or possibly expand it to more of the chain’s 44 hotels around the world.

Adam Munday, the hotel’s general manager said the idea was inspired by Newcastle’s literary heritage. The city was once a publishing hotspot, and the hotel is found in near the Literary and Philosophical Society – the largest independent library outside London, which houses more than 150,000 books.

“In the 18th Century, Newcastle was one of the largest print centres in Britain and we’re in Grainger Town, close to the Literary and Philosophical Society,” he said. “We wanted to reflect this literary history in a very contemporary way, so are offering guests the use of cutting-edge Kindles pre-loaded with The Bible, instead of the more traditional hardcopy Gideon’s Bible that they would expect to find in a hotel.”

Gideons International is a US-based evangelical Christian organisation founded in 1899. It is dedicated to distributing free copies of the Bible, often in hotel rooms. Nearly 80 million bibles were distributed last year.

July 2, 2012
Absolution at Gettysburg: the story of Fr. William Corby
Next Post

July 3, 2012 "St. Thomas definitely landed on this very spot..."
Browse Our Archives
get the latest from
Catholic
Sign up for our newsletter
POPULAR AT PATHEOS Catholic
1