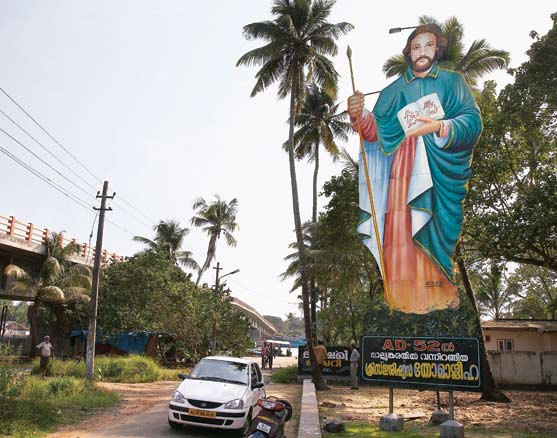 Today the Latin church marks the feast of the celebrated “Doubting Thomas,” the skeptic who became a saint. Tradition holds that after the resurrection, St. Thomas the Apostle traveled to India.   But what happened after that?

Here’s a glimpse at the region he visited, from two years ago in the pages of ONE:

“St. Thomas definitely landed on this very spot,” says Philomena Pappachan, caretaker of a chapel that marks where the doubting apostle arrived in southern India in the year A.D. 52. Located a few feet from the cemented banks of the Periyar River, the chapel is dwarfed by a grove of palm trees and a 30-foot cutout of the saint, who is depicted with a staff and an open book on which “my Lord and my God” is printed in English.

No archaeological evidence exists to substantiate or refute her claim. Yet for nearly two millennia, countless numbers of Christians and Hindus have believed “the holy man” journeyed through Syria, Mesopotamia, Persia and finally India, where Thomas died a martyr’s death in the year 72.

Based on oral tradition, the fathers of the church — notably Clement of Alexandria, Ephrem the Syrian, Gregory of Nazianzus, Ambrose of Milan, Jerome and Gregory of Tours — all write of his travels, deeds and faith.

In works such as the “Ramban Song,” an ancient lyrical poem, Indians remember Thomas’ miracles and the places where he preached, baptized and founded seven churches. Today, these shrines are major pilgrimage sites for Thomas’ spiritual heirs…

…Thomas worked among Jewish communities that, according to some scholars, had flourished along the Periyar River since the seventh century B.C. He also preached the Gospel to Hindus of all castes, some of whom embraced the faith while others adapted his teachings but remained Hindu. Over two decades, he founded churches in Azhikode, Kollom, Niranam, Chayal, Kokkamangalam, Kottakkavu and Palayur. Thomas also erected crosses near Mount Malayattur and Thiruvithancode, which locals today call “half churches.”

Culled from the communities he founded, Thomas ordained priests and deacons to minister to their spiritual and temporal needs. Eventually, the heirs of St. Thomas became dependent on the Church of the East — an Eastern Syriac church founded by Thomas and centered in the Persian Empire. The catholicos-patriarch of the Church of the East regularly sent bishops to southern India to ordain priests and deacons and regulate ecclesial life.

For more than 1,500 years, India’s Thomas Christians were fully integrated into Indian society. Their liturgical practices reflected their Eastern Syriac ties. Other elements of this tradition — such as the architecture of their churches and their way of remembering the dead — revealed their Hindu cultural heritage.

Also, our Orthodox siblings have this beautiful troparion in tribute to Thomas (though they celebrate his feast on a different date):

Troparion – Tone 7
From the sealed tomb, You did shine forth O Life! Through closed doors You did come to Your disciples, O Christ God! Renew in us, through them, an upright spirit, By the greatness of Your mercy, O Resurrection of all!

Kontakion – Tone 8
Thomas touched Your life-giving side with an eager hand, O Christ God, When You did come to Your apostles through closed doors. He cried out with all: You are my Lord and my God!

July 2, 2012
Just in time for vacation season: hotel swaps the Bible for Kindle
Next Post

July 3, 2012 Just desserts: Biden visits nuns in Iowa
Browse Our Archives
get the latest from
Catholic
Sign up for our newsletter
POPULAR AT PATHEOS Catholic
1