OSV: Your decision to accompany pilgrims to Medjugorje has surprised some people, especially given the statements coming out of the local diocese and Rome that have questioned the authenticity of the apparitions. Could you give us some insight into how you approach this question and about how we can approach it as well? 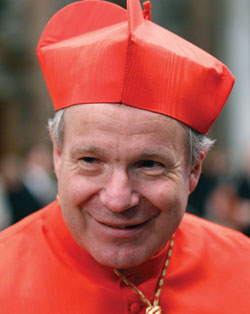 Cardinal Schönborn: I think that the Church’s teaching on Medjugorje is very clear. The bishops of the countries of the former Yugoslavia took a clear position in 1991. This is still valid and has been confirmed by the Vatican twice. There are three important points in this statement. First, that it is not confirmed that the events are of supernatural origin. That means it is neither confirmed nor denied. The Church left it open. The second point is that as the so-called apparition question and message question has not been decided it is not permissible to make official pilgrimages to Medjugorje. So, for example, I cannot organize a formal diocesan pilgrimage to Medjugorje as we can to Rome or Fatima or Lourdes. The third point, however, is that the people who choose to go to Medjugorje on their own are entitled to spiritual care. So, we priests or bishops are invited to provide spiritual company to pilgrims. That’s what my predecessors in Vienna did from the very beginning regarding Medjugorje, and that’s what I continue to do. I think these three points are sufficient for a good understanding of how to approach Medjugorje. The most important for me are the overwhelming good spiritual fruits of Medjugorje.

Marija Lunetti, one of six young peasants who claimed that the Virgin Mary began appearing to them in 1981 in Medjugorje, Yugoslavia, says the mother of Jesus is aware of the economic crisis in Europe.

“She’s more preoccupied with spiritual (matters),” Lunetti said. “When there is a spiritual crisis, there is also an economic crisis.”

Lunetti spoke briefly in an interview about the economic crisis in Europe and the weather — “Hot like here,” she said — before she had her daily apparition on Sunday (July 1) night on her visit to Shelby County, Ala. During the apparitions, she says the Virgin Mary appears to her and prays over the pilgrims, even though they cannot see her vision.

She’s staying this week at the home of Terry Colafrancesco, founder of Caritas of Birmingham, a ministry that runs a large publishing operation and promotes the visions in Medjugorje.

However…speaking of Caritas of Birmingham…

A priest in Medjugorje has expressed his misgivings about the organization that this week is hosting one of the alleged visionaries:

“It appears that the organization does not follow good practice of Church discipline as well as the discipline of its members in regard to their ways in which they are organized within. We are afraid that there might be elements of a lack of respect for family relationships, mutual respect, respect for the church authority, respect for the families where the members come from, respect for property of family members who are there now and those who were there and left the community…”

The same website has described Caritas as a “cult.”

Another reason, among many, why I think it’s wise to steer clear of unapproved “apparitions.”

July 6, 2012 Melinda Gates on her Catholicism, and contraception
Browse Our Archives
get the latest from
Catholic
Sign up for our newsletter
POPULAR AT PATHEOS Catholic
1

The Reputation They Deserve
Yesterdays I saw the news that the Archdiocese of Milwaukee will...
view all Catholic blogs
Copyright 2008-2021, Patheos. All rights reserved.