The drug dealer who became a monk 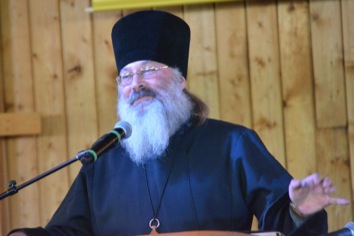 After years of a life of hedonism and drug addiction, he returned to the faith and for about a dozen years now he has been serving as a hieromonk (pastor-monk) in the Ukrainian Catholic Church.

Father Taras (Terry) Kraychuk, who currently lives the monastic life in the Derwent, Alberta area, gave a partial testimony of his life at the Catholic Family Life Conference at Lac Ste. Anne July 1.

Born and raised in Winnipeg, Father Kraychuk was the child of a devout Ukrainian Catholic family that prayed together and attended Mass together. “I grew up in the faith but I drifted away from those roots,” he told about 2,000 people attending the June 29-July 2 conference. “When I was about 15 or 16 I was into the drug scene.”

As Father Kraychuk put it, he rejected the land of the Church and took off to find another land. He began seeking that which would satisfy him. “I wanted to experience all the excitement, all the drugs, all the partying, all that belongs with that kind of life.”

When he was kicked out of high school he left the Church and his family and then, whole-heartedly embracing his passion to find meaning and happiness in life, became a biker and travelled throughout much of the United States and Canada.

He never stopped believing that God existed but essentially abandoned himself to fate. Any time he would get in trouble because of his lifestyle he would call on God. He constantly read his Gideon Bible believing that if he read it often, God would protect him from the police.

He followed his heart and ended up in southern California, feeling freer than ever. He had everything he had ever wanted. “I was living in a place where all my needs where met, selling drugs and making money.”

But one rainy day as he looked through the window he came to himself. He felt empty and thoughts of suicide visited his mind.

“I really thought there was nothing to live for,” he said. “I wanted to blow myself away because there was no reason; this is all absurd. This is all meaningless.”

In that moment he heard a voice commanding him to take the Bible and read it. He opened it up to St. Paul’s letter to the Galatians, where St. Paul lists those who will not make it to the kingdom of God: drunkards, fornicators, adulterers. He checked every item in the list.

Then he read that he could find salvation by repenting and following Christ. However, even at this point, Kraychuk didn’t want anything to do with God or religion. “I don’t want to become a Jesus freak,” he thought.

July 12, 2012
The (abridged) history of Western Music, told through "It's A Wonderful World"
Next Post

July 12, 2012 At the Vietnam Veterans Memorial, caring for the things they leave behind
Browse Our Archives
get the latest from
Catholic
Sign up for our newsletter
POPULAR AT PATHEOS Catholic
1