From LCWR: talks with Vatican will continue, group will not “compromise its mission” 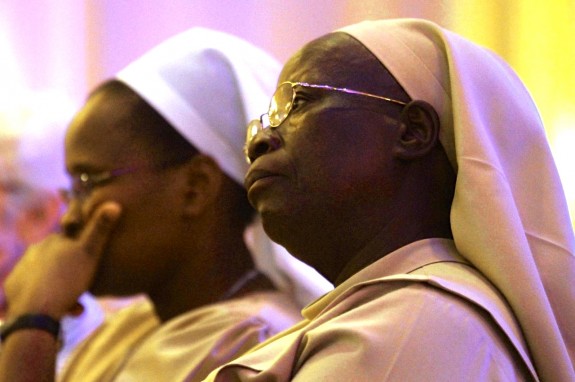 An American nuns group rebuked by the Vatican said Friday it would hold talks with the bishops appointed to overhaul the organization but would not “compromise its mission.”

Sister Pat Farrell, president of the Leadership Conference of Women Religious, called a Vatican assessment charging the sisters with tolerating dissent a “misrepresentation.” But she said the more than 900 women who attended the group’s national assembly this week decided they would stay open to discussion for now with three bishops the Vatican appointed to oversee them.

“The officers will proceed with these discussions as long as possible but will reconsider of LCWR is forced to compromise the integrity of its mission,” Farrell said at a news conference, where she declined to discuss specifics.

The organization represents about 80 percent of the 57,000 Roman Catholic nuns in the U.S.

The St. Louis meeting was the group’s first national gathering since a Vatican review concluded the sisters had “serious doctrinal problems” and promoted “certain radical feminist themes” that undermine Catholic teaching on all-male priesthood, birth control and homosexuality. The nuns also were accused of remaining nearly silent in the fight against abortion.

Farrell acknowledged the nuns’ plan going forward was vague, but noted the process was to last five years and had only just started. The board is expected to meet soon with Seattle Archbishop Peter Sartain, who will be in charge of the overhaul.

“Dialogue on doctrine is not going to be our starting point,” Farrell said. “Our starting point will be about our own life and about our understanding of religious life, and the (Vatican) document’s, in our view, misrepresentation of that, and we’ll see how it unfolds from there.”

August 10, 2012 Though more priests are using iPads, Vatican writer insists only books are proper for Mass
Browse Our Archives
Related posts from The Deacon's Bench