Ohio gets another basilica

This happened in June, but it hit the local paper yesterday.   Details:

Historic St. John the Baptist Catholic Church at 627 McKinley Ave. NW has been elevated to a “minor basilica” by the Vatican. 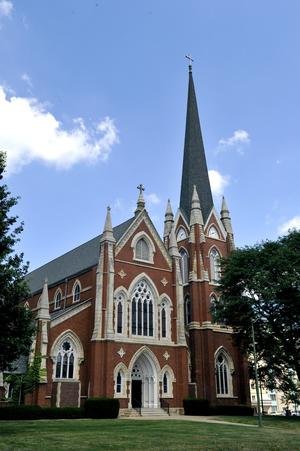 It’s now called the Basilica of St. John the Baptist.

According to the Catholic Diocese of Youngstown, a decree granting the title was sent by the Vatican to Bishop George V. Murry on June 19.

St. John is the only minor basilicas in the diocese and one of just 74 in the U.S., said parish president George Mangus.

Ohio’s only other minor basilica is the Basilica and National Shrine of Our Lady of Consolation in Carey.

“Within the church hierarchy, sites of worship fall into four categories: parish church, cathedral, shrines, and major and minor basilicas,” he explained. “The idea of being elevated to basilica status is an honorary title. It’s based on recognition that a particular parish church has a history, (significant) architecture, a history of social outreach and education worthy of being recognized.”

As a minor basilica, St. John is responsible for promoting the teachings of the church and the pope; for providing liturgical information; and for making appropriate provisions for the celebration of sacraments and other official devotions.

Mangus said the elevation also recognizes the role that St. John has played in the formation of Catholicism in Ohio.

“A lot of it stems from St. John as a ‘mother’ church of so many in the surrounding counties,” he said. “St. John was listed as a parish in 1823 before there was a Catholic church in many of Ohio’s larger cities. It also has a tradition and reputation for classical liturgy and sacred music.”

Read more.   And visit the basilica’s website for more details and pictures.

August 8, 2012
Who knew? First winner of modern Olympics was Catholic
Next Post

What's the Biggest Difference Between Catholics...
The Cordial Catholic
Books by This Author Books by Deacon Greg Kandra