The Roman Catholic archbishop-elect of San Francisco was arrested for investigation of driving under the influence, San Diego police said Monday. 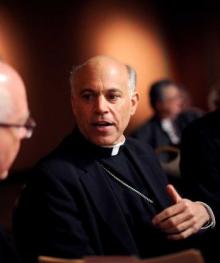 The Rev. Salvatore Cordileone, a vigorous supporter of California’s same-sex marriage ban, was taken into custody after being stopped early Saturday at a checkpoint near the San Diego State University campus, said Detective Gary Hassen, a police spokesman. He declined to comment on whether Cordileone took a sobriety test.

There was no record of Cordideone being in custody on Monday. The San Diego city attorney’s office, which prosecutes misdemeanor DUI offenses, said it had not received a report on the arrest.

Cordileone, 56, is a native of San Diego, where he was raised and ordained as a priest in 1982. In July, Pope Benedict XVI selected him to replace Archbishop George Niederauer, who is retiring in October. Cordileone was most recently bishop of Oakland and several years ago, he was an auxiliary bishop in San Diego.

Bishop Salvatore J. Cordileone, 56, who was appointed archbishop in July, was taken into custody Saturday at 12:26 a.m. after being stopped on College Avenue near Montezuma Road, police said.

Cordileone, who is a San Diego native, was booked into county jail on a misdemeanor charge of driving under the influence and later posted bail.

UPDATE II:  The bishop has released a statement:

The Rev. Salvatore Cordileone said in a statement issued by his office that he was driving home from a dinner with friends in San Diego with his mother early Saturday when he was pulled over at a DUI checkpoint near San Diego State University. He said a sobriety test showed his blood alcohol level to be above the legal limit, although he did not say by how much.

“I apologize for my error in judgment and feel shame for the disgrace I have brought upon the Church and myself,” he said. “I pray that God, in His inscrutable wisdom, will bring some good out of this.”

August 27, 2012
A delicious idea: restaurant offers discount to diners who don't use cell phones
Next Post

August 27, 2012 Headline of the day
Browse Our Archives
get the latest from
Catholic
Sign up for our newsletter
POPULAR AT PATHEOS Catholic
1