The other Ryan: the candidate’s wife, Janna 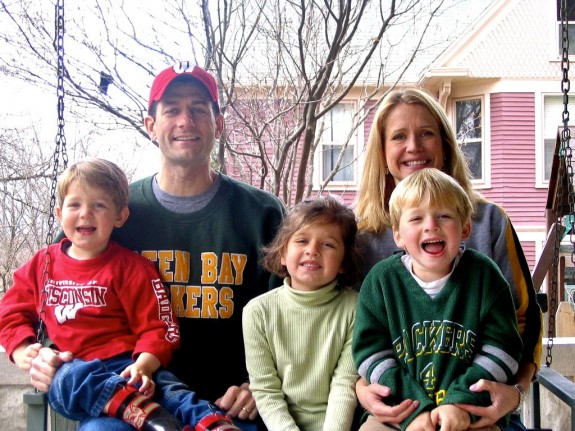 An interesting glimpse at Paul Ryan’s wife, from the Washington Post:

Janna Ryan, wife of Republican vice presidential pick Rep. Paul Ryan, is the poster girl for Generation X women who wanted to have it all.

Ryan, 43, like many of her 40-something peers, is a stay-at-home mother with an impressive resume. She prefers her husband’s hometown, Janesville, Wis., to Washington and remains out of the political limelight.

But Janna Christine Little Ryan hails from Oklahoma, a state known for its Will Rogers’s common-sense ideals mixed with a smidgen of Wild West attitude.

She grew up Madill, Okla., in the southern part of the state on the Texas state line. Founded in 1901, the small town, population 3,781 in 2009, was a spot on the train route from Dallas to Tulsa. Madill is also known for its trailer manufacturing firms.

Politics, it appears, was in Janna’s blood from the beginning.

The Oklahoman’s political blog reported Saturday that her grandfather, Reuel W. Little, was a lawyer and rancher in the state who helped form a third political party in Oklahoma in the 1960s. His 1993 obituary stated that he was the American Party’s gubernatorial candidate in 1970. Three years earlier, Little started the push for a third party in order to get former Alabama governor George Wallace on the ballot as a presidential candidate.

Janna’s first cousin is Oklahoma Democratic Rep. Dan Boren. He issued a statement on Saturday about the Ryans:

“Andrea and I are excited for Paul and Janna. Janna and I grew up together and I couldn’t be more proud of my cousin. Like my late mother after whom she is named, Janna is a wonderful parent to their children and will be Paul’s strongest supporter on the campaign trail.”

Janna left Oklahoma to attend Wellesley College, the alma mater of many remarkable women including Hillary Clinton, Madeleine Albright and Diane Sawyer. After graduation, she attended George Washington University Law School and became a tax attorney and lobbyist for PricewaterhouseCoopers in Arlington, Va.

Janna met Paul through a mutual friend. Rumor has it that the pair often hunted together (Paul Ryan prefers bows and arrows for hunting) during their brief courtship in 1999. They even shared a deer stand. Not surprising, since every Oklahoma woman I know loves to hunt.

Paul asked Janna to marry him on a lake where he often fished. They married in Oklahoma City in 2000 and then settled in Ryan’s Wisconsin’s home town, population 63,479, where they live in a historic house with six bedrooms and eight baths.

The couple has three children: Elizabeth Anne, Charles Wilson, and Samuel Lowery. According to news reports, Janna is a devout Catholic and attends St. John Vianney Catholic Church with her husband when he is in town.

An owner of an Italian restaurant in Janesville told Politico, “She’s a very soft spoken, elegant, and lady-like. Very family-oriented. Always with her kids, always here picking up food for her family. Just warm, easygoing, not upfront in the public arena. You can see her on the TV, she really stays back and doesn’t attract much attention to herself. Just an amazing lady-like figure.”

August 11, 2012
Meet the nun involved in the "biggest security breach in the history of the nation's atomic complex"
Next Post

August 12, 2012 My day of rest
Browse Our Archives
get the latest from
Catholic
Sign up for our newsletter
POPULAR AT PATHEOS Catholic
1