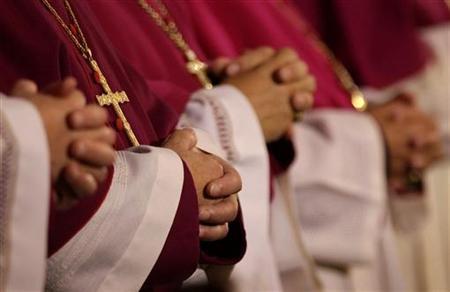 At a time when more Germans are leaving the Church and fewer are being baptized, the bishops have embarked on a bold crackdown.

Germany’s Roman Catholic bishops have decreed that people who opt out of a “church tax” should not be given sacraments and religious burials, getting tougher on worshippers who choose not to pay.

Alarmed by a wave of dissenting Catholics quitting the faith, the bishops issued a decree on Thursday declaring such defection “a serious lapse” and listed a wide range of church activities from which they must be excluded.

Germans officially registered as Catholics, Protestants or Jews pay a religious tax of 8 or 9 percent of their annual tax bill. They can avoid this by declaring to their local tax office that they are leaving their faith community.

The annual total of church leavers, usually around 120,000, rocketed to 181,193 two years ago as revelations about decades of sexual abuse of children by priests shamed the hierarchy and prompted an apology from German-born Pope Benedict.

“This decree makes clear that one cannot partly leave the Church,” a statement from the bishops conference said. “It is not possible to separate the spiritual community of the Church from the institutional Church.”

Church taxes brought in about 5 billion euros ($6.5 billion) for the Roman Catholic Church and 4.3 billion euros for the Protestant churches in 2010, according to official statistics.

The bishops said the consequences of leaving the church had not been clearly spelled out in the past. Some Catholics have tried to remain active in their parish or have a religious burial despite leaving the church to avoid paying the tax.

The Vatican gave its approval for the decree before it was issued, the statement said.

Catholics who leave can no longer receive sacraments, except for a special blessing before death, the decree states.

They cannot work in the church or its institutions, such as schools and hospitals, or be active in church-sponsored associations such as charity groups or choirs.

They cannot be godparents for Catholic children and must get a bishop’s permission to marry a Catholic in a church ceremony.

And there’s more.  Read the rest.

And there’s more at this link, including a link to the decree (in German).

September 22, 2012 Homily for September 23, 2012: 25th Sunday in Ordinary Time
Browse Our Archives
get the latest from
Catholic
Sign up for our newsletter
POPULAR AT PATHEOS Catholic
1