Rep. Tim Huelskamp (R-Kan.), who has four adoptive children of African American, Hispanic, and Native American descent, said on Friday that Planned Parenthood “was created for the sole purpose of killing children that look like mine.” 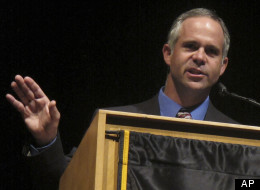 “Like the pro-slavery forces who invaded Kansas, the pro-abortion forces in Washington and elsewhere want us to believe that abortion is not murder — that being born is worse than death, that the unborn baby is property, not a person,” Huelskamp said at the 2012 Values Voter Summit, where vice presidential candidate Rep. Paul Ryan (R-Wis.) and Rep. Todd Akin (R-Mo.) also spoke.

Huelskamp criticized Obama and the Democrats for wanting to fund Planned Parenthood, adding, “I am incensed that this president pays money to an entity that was created for the sole purpose of killing children that look like mine — a racist organization, and it continues specifically to target minorities for abortion destruction. Shame on this president and shame on that party.”

“Planned Parenthood condemns racism or discrimination in any form. It is not what we stand for or work for,” she said. “Rep. Tim Huelskamp cannot possibly understand the complex decision for a woman who is considering whether to raise a child, choose adoption or end a pregnancy. That decision should be made by a woman, her family, and her faith, with the counsel of her doctor or health care provider.”

September 14, 2012
"The cross is something wonderfully great and honorable..."
Next Post

The Kingdom Of God, The World United As...
Paul, writing to the Ephesians, also writes to us, telling us that...
view all Catholic blogs
Copyright 2008-2021, Patheos. All rights reserved.
Close Ad