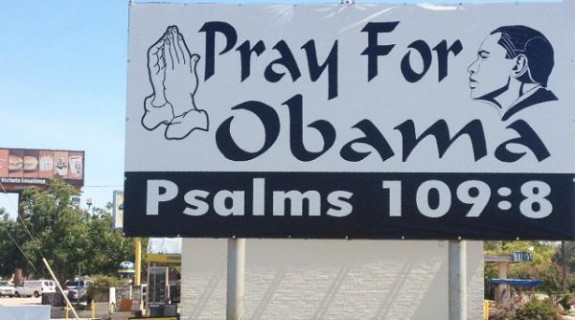 It’s not the sign that’s causing trouble, but the Bible verse accompanying it.

The Secret Service is looking into a sign posted in Victoria, Texas.

The sign says “Pray for Obama”, but it’s the scripture quoted below those words that is raising eyebrows: Psalms 109:8.

Milton Neitsch  Jr., who has lived in Victoria since 1961,  says he didn’t intend for people to pick up on the hateful wishes of death and pain surrounding the tiny verse.

But some people say it is hateful and inappropriate. They say it misuses the holy scripture and it must come down.

Neitsch  recently received an email from a friend and decided to post it on his advertising billboard along North Navarro Street. He had no idea the firestorm of controversy it would create.

“Pray for the president. He needs it,” said Neitsch.

When asked what the sign means, Neitsch responded, “Exactly what it says. Hope he’s gone soon and somebody different takes his place.”

Reverend Amy Danchik started a petition demanding Neitsch take down the sign. They’ve since met and Neitsch and agreed to replace the billboard.

“He shared with me a little about some of the threats that have come at his family, which is incredibly inappropriate, and in no way helpful and in no way how we’re called to react  when we disagree with somebody,” said Danchik. “So I hope that those stop. I hope that people will react with the graciousness that he has reacted with and leave his family alone.”

Neitsch says he is also getting plenty of support. He said he might replace the sign with something like, “Vote for the American”, a sign that would no doubt stir emotion, while leaving the word of God to the experts.

September 1, 2012 Archbishop rebukes priest who took part in same sex wedding
Browse Our Archives
get the latest from
Catholic
Sign up for our newsletter
POPULAR AT PATHEOS Catholic
1