A Wisconsin school district has ordered a joint public-private school football team to change its logo – in the middle of the season — after a lone parent said the inclusion of a bishop’s hat and cross was a violation of the U.S. Constitution. 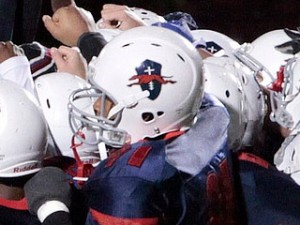 Martin Lexmond, superintendent of the Shorewood School District, told Fox News that he made the decision to remove the logos after consulting with the school board.

“It just didn’t occur to anybody that there might be questions about it,” he said. “A parent last week raised the question asking if this was a violation of separation of church and state.”

The school district has a unique partnership with a Messmer, private Roman Catholic high school. In 2000 the two small schools

Bob Smith, president of the Catholic school, told WTMJ that he was “not happy

” about the decision and said it “is hurtful for the kids.”

The new logo was created a few months ago by a Shorewood student and put on football helmets in August. Football coaches from both schools along with high school administrators signed off on the project.

The new logo included a greyhound logo of Shorewood and a bishop’s hat with a cross that represented Messmer.

“It’s clearly a Christian cross,” school board member Michael Mishlove told Mequonnow.com. “I think it’s inappropriate to have on a uniform or any sort of school authorized clothing, as I think it could be viewed as an endorsement.”

Lexmond agreed – and decided to censor the logo – instead of pursue the matter.

“We don’t know the answer to the question of separation of church and state but we are choosing to focus on the story of our young people – not on that question,” he told Fox News.

October 15, 2012
First look: the new deacons of Richmond
Next Post

October 15, 2012 First look: the new deacons of Richmond
Browse Our Archives
get the latest from
Catholic
Sign up for our newsletter
POPULAR AT PATHEOS Catholic
1