Some good advice for watching the debate tonight

From the legendary Newton Minnow, who knows a thing or two about television and debates, in today’s New York Times: 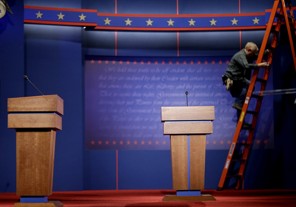 The debates are an institution now, and among the most watched television events in America. They are one place in the modern campaign — perhaps the only place — where the voter is treated with respect. They are the one time when the major candidates appear together side by side under conditions they do not control. They are a relief from the nasty commercials that dominate the campaign, fed by donations that are effectively unlimited and anonymous. Broadcasters provide the television time for the debates, without commercials, as a rare public service…

…The debates are one of the few features of our political campaigns that are still admired throughout the world. Candidate debates are still new in most democratic countries, even in Western Europe. Britain, often held up as a model for how to hold a proper election, only in 2010 began to have televised live debates among the party leaders vying to be prime minister.

Let me suggest that after you watch the debate on Wednesday night, you turn off your television set and do your best to avoid the spin that will follow. Talk about what you saw and heard with your family, your friends, your neighbors, your co-workers. You are smarter than the spinners. It’s your decision that matters on Nov. 6, not theirs.

Felix of Nantes- July 7 (Everyday Saints Series)
Felix was a bit of an oddity as far as priests go–...
view all Catholic blogs
Copyright 2008-2020, Patheos. All rights reserved.