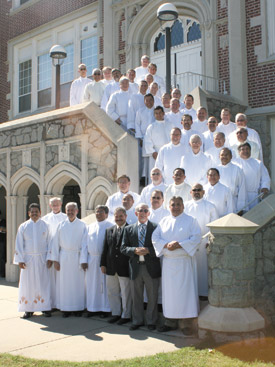 Some happy news, from the Arkansas Catholic:

For the first time in a decade, the Diocese of Little Rock will ordain new deacons to minister and serve the Catholic faithful in Arkansas. Bishop Anthony B. Taylor will ordain 40 candidates this month in Rogers and Little Rock, more than double the number for the last diaconate ordination in 2002.

This year’s class is noteworthy as the first dual-formation class in diocesan history, with 23 Anglo and 17 Hispanic candidates. As a result, ordination rites — set for Nov. 17 at St. Vincent de Paul Church in Rogers and Nov. 24 at Christ the King Church in Little Rock — will be celebrated in both English and Spanish. Both liturgies will begin at 10 a.m.

This year’s ordination Masses were divided into two dates to shorten potential travel distances for congregants and to help accommodate standing-room only crowds.

Directors of formation Deacon Robert Wanless and Deacon Marcelino Luna led the class through their four years of formation in English and Spanish, respectively. The monthly classes for the men and their wives began in 2008 with 52 candidates.

Luna said the opportunity to educate the Hispanic candidates in their native language was “a great experience.”

“This was a big challenge,” he said. “We really had to depend on the Holy Spirit from day one. I can already see the impact these men will have on the Hispanic community. I’m getting calls from others in the diocese asking questions about discerning a vocation.”

Wanless said discernment always involves deep commitment and sacrifice from candidates and their families. Bringing a bilingual element to formation added to the complexity of the process, but steps were taken to combine the two groups wherever possible, such as for Mass and meals. Through it all, the unique circumstances did nothing to dampen the spirits of the candidates.

“What stood out about this class was their enthusiasm,” he said. “Even after four years, there’s still such an enthusiasm they have that it really validates that they have been called to this.”

November 15, 2012
On the horizon: revised Liturgy of the Hours
Next Post

November 16, 2012 "Dear friends, open your eyes and look around you..."
Browse Our Archives
get the latest from
Catholic
Sign up for our newsletter
POPULAR AT PATHEOS Catholic
1