Irish deacon ordination: first of its kind in 1,500 years 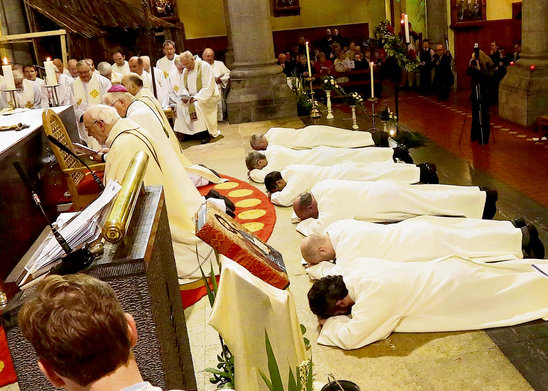 A post-primary teacher, a bakery manager and a tool designer were among six men ordained as permanent deacons in Sligo on Saturday, a Catholic ministry which permits them to preside at funerals, celebrate Baptism and officiate at marriages.

The new deacons, all married and in permanent employment, were ordained at Sligo cathedral by the Bishop of Elphin, Christopher Jones. He described the occasion as “truly joyous” and historic, pointing out that it was almost 1,500 years “almost back to the time of St Patrick himself” since a similar ordination had taken place in the diocese.

Fr Michael Duignan, director of the permanent diaconate in the diocese, told reporters that responding to a shortage of priests was not the primary reason for the revival of the permanent deacon, but he agreed that it would be “very helpful”.

Newly ordained William Gacquin (57), who teaches Spanish, Irish and religion at CBS Roscommon, said the last recorded reference to a deacon in diocesan records was when one baptised St Ciaran in the parish of Fuerty, Co Roscommon, in the sixth century.

The men were ordained following four years of study at St Angela’s College Sligo. The ministry does not permit them to say Mass, although they can assist the priest, read the Gospel and preach a homily. They cannot hear Confession or anoint the sick.

One of the deacons, Wando Araujo (41), a father and grandfather, originally from Brazil, now lives in Roscommon town, where he runs a bakery.

“I regard the diaconacy as a vocation,” he said. His brother Claudio has already invited him to officiate at his wedding in Brazil next summer.

Frank McGuinness (42), a native of Rossinver, Co Leitrim, was keeping a close eye on his sons James (5) and John (10) as the families waited to be photographed with the bishop after the ceremony. He said his decision was far from a shock to his wife Louise: “Faith is a big part of both our lives.”

Congratulations, one and all!  Ad multos annos!

December 9, 2012
End of an era: Sony ceases production of cassette recorders
Next Post

December 9, 2012 A deacon's dazzling Christmas light display
Browse Our Archives
get the latest from
Catholic
Sign up for our newsletter
POPULAR AT PATHEOS Catholic
1