On “Les Miserables”: “This is me honoring that this pain lives in the world…” 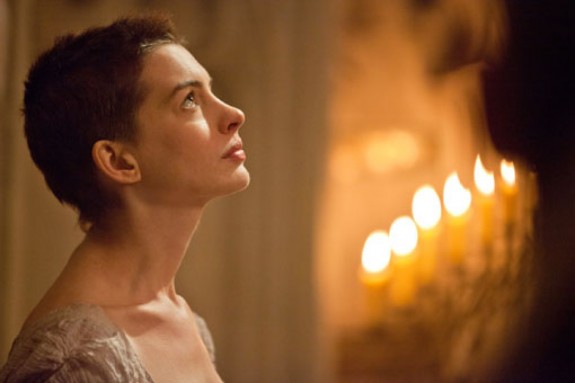 My blog neighbor Tony Rossi has a terrific posting up today about the new movie of “Les Miserables,” and some fascinating quotes from the stars about the show’s message and meaning, particularly for today:

For her role as Fantine, the young mother forced to work as a prostitute in order to earn money to support her daughter, Anne Hathaway approached the character from a place of pain. Not just the pain of a 19th century character in France, but the agony of real women today who are victims of sexual slavery.

Hathaway said, “I read a lot of articles and watched news clips about sexual slavery. I came to the realization that I had been thinking of Fantine as someone who lives in the past, but she doesn’t. She’s living in New York City right now…So every day that I was her, I thought, ‘This isn’t an invention, this isn’t me acting. This is me honoring that this pain lives in this world, and I hope in all of our lifetimes we see it end.”

One woman she saw in a video clip had a particular effect on Hathaway and was, in fact, the person who influenced her characterization the most. She recalled, “She kept repeating, ‘I come from a good family. I come from a good family. We lost everything and I have children. So now I do this.’ She didn’t want to do this, but it was the only way her children were going to eat. Then she let out this sob like I’ve never heard before. And she raised her hand to her forehead, and it was the most despairing gesture I’ve ever seen. That was the moment I realized I wasn’t [just] playing a character; this woman deserves to have her voice heard. I needed to connect with that honesty and re-create that feeling. She’s nameless, I’ll never know who she is. She really was the one who made me understand why Fantine felt shame, what it’s like not just to go to a dark place, but to have fallen from a place where you didn’t think anything bad was ever going to happen to you – and the betrayal and rage you feel at life because you’ve gone through that.”

There’s much more.  Read it all.

For those who are counting the days until it’s only “One Day More” for the movie’s release…and yes, I’m one of them…the producers have released several brief clips.  A sampling, below.

December 3, 2012
See this and smile: some kind words on a public street
Next Post

Catholic
WATCH: A different side of Jim Gaffigan
The Deacon's Bench
TRENDING AT PATHEOS Catholic