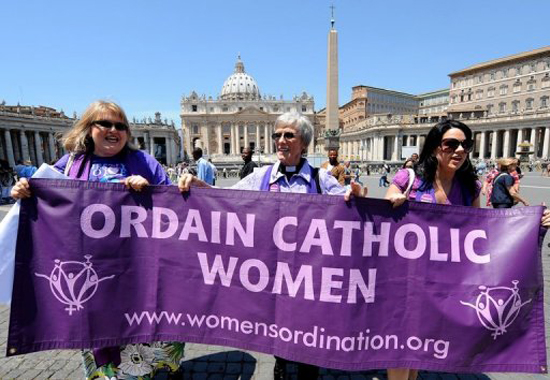 But somehow, this doesn’t surprise me. How much longer until the name becomes the National Christian Reporter?

Calling the priesthood a “gift from God … rooted in baptism,” the National Catholic Reporter says that “barring women from ordination to the priesthood is an injustice that cannot be allowed to stand.”

The Kansas City, Mo.-based newspaper’s editorial pits it directly against the Vatican, where church leadership has strongly rejected any possibility of women being ordained, even as a small pro-ordination movement has grown and independently ordained several women in recent years.

The editorial comes weeks after the Vatican’s Congregation for the Doctrine of the Faith’s laicization and excommunication of Roy Bourgeois, a former American priest and peace activist who was a member of the Maryknoll Fathers and Brothers and an outspoken supporter of the women’s ordination movement in the U.S., was made public. In a high-profile Mass in 2008 in Lexington, Ky., Bourgeois claimed to ordain a woman into the Roman Catholic priesthood. His religious order later said that he was part of an “invalid ordination of a woman and a simulated Mass.”

Denis Coday, the editor of the newspaper, said it supports Bourgeois and women’s ordination activists, several of whom were shortly detained in Vatican City in October after attempting to march on the Vatican to protest its policy against ordaining women. The editorial argues that “exclusion of women from the priesthood has no strong basis in scripture or any other compelling rationale.”

“In the late 1980s and early ’90s, there was increased talk in church circles — even at the bishops’ conference level — to reexamine the ban on ordaining women. At the same time, there was increasing Vatican pressure to stop such talk,” said Coday. “The Vatican pressure to squelch even discussion of this issue culminated with Ordinatio Sacerdotalis, which tried to put the stamp of infallibility on this teaching,” he said, referring to a 1994 apostolic letter by Pope John Paul II that said the church “has no authority whatsoever to confer priestly ordination on women.”

“Despite the Vatican’s best efforts to suppress discussion of this issue, Catholics have discussed it and studied it and they have found the church’s rationale unsatisfying,” Coday said. “What the editorial says is that the Catholic faithful — laypeople, theologians and perhaps even some bishops — have studied and prayed over this issue and they have come to the conclusion that the ban on women priests must be lifted.”

While the National Catholic Reporter, which has 33,000 print subscribers and a wider online reach, is known as a liberal newspaper, this is the first time it has directly challenged the Vatican and supported women’s ordination in an editorial. The newspaper, which HuffPost Religion partners with to publish some of its articles, is run by lay people and not priests. Its staff does not report to the Vatican and is unlikely to suffer repercussions from church authorities for its position.

You can read the NCR editorial here.

Although the teaching that priestly ordination is to be reserved to men alone has been preserved by the constant and universal Tradition of the Church and firmly taught by the Magisterium in its more recent documents, at the present time in some places it is nonetheless considered still open to debate, or the Church’s judgment that women are not to be admitted to ordination is considered to have a merely disciplinary force.

UPDATE: Elizabeth Scalia responds to NCR over at First Things:

If “no one can say” who God can and cannot call to the priesthood, then why do we have interview, testing, and discernment processes? Why can’t we all just be priests, any time we want? If corporeal anatomy is completely unconnected to a human being’s essential nature (and this is an argument put forth by feminists and the gender-fixated, who will often pronounce it in one breath only to promote the “sacred feminine” in the next) then why did God design differences at all? By doing so, he created boundaries and barriers, which are clearly unwanted things. Why didn’t God fashion just one human type, without limits to what that type can do, in order to free humanity from the constraints of form and function which impact “God’s [own] ability to call one of God’s own children forward . . .” to do the things they really want to do, whether the church thinks they ought to, or not?

Golly, I think the Reporter is arguing that God should stop making rocks so heavy that He can’t lift them. Or something.

The editorial board makes an oddly Protestant (dare I say it, Evangelical) argument; it rejects the authority of tradition (and the philosophical ponderings of Holy Men and Women who—we say we believe—were imbued with wisdom by the Holy Spirit) in favor of trending thought. Then it goes sola scriptura, arguing a negative by quoting the Pontifical Biblical Commission’s assessment that “Scripture alone does not exclude the ordination of women”, all of which leads to the pronounced conclusion: “unjust.” The reasoning the Reporter puts forth here, by the way, is identical to the reasoning offered by many on the issue of same-sex marriage: tradition is not authority and the New Testament does not explicitly forbid it. Secondary points are usually social: the sentiment of the times demands it; the expedience of utility demands it, and therefore the teaching of the church is discriminatory and unjust.

And there we find that implicit charge, again, that the church is working against the God of All Justice.

Perhaps it is time for the people making these arguments to come right out and say they think the church is opposing God; let us then have a truly open dialogue about narrow gates and the sufficiency of grace; about what God asks of us, and what God promises in return for obedience. Do we dare have that terrifying, inconvenient conversation?

December 3, 2012 Israeli government plans to build military base on Mount of Olives
Browse Our Archives
Related posts from The Deacon's Bench