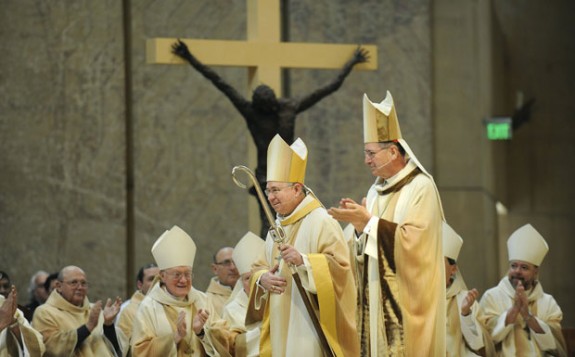 Los Angeles Archbishop Jose Gomez announced Thursday that Cardinal Roger Mahony would have a reduced role in the church and that Santa Barbara Bishop Thomas J. Curry has stepped down from that job amid recent revelations over their handling of the priest abuse scandal in the 1980s.

“Effective immediately, I have informed Cardinal Mahony that he will no longer have any administrative or public duties. Auxiliary Bishop Thomas Curry has also publicly apologized for his decisions while serving as Vicar for Clergy. I have accepted his request to be relieved of his responsibility as the Regional Bishop of Santa Barbara,” Gomez wrote in a letter.

In the letter, Gomez says, among other things: “I find these files to be brutal and painful reading. The behavior described in these files is terribly sad and evil. There is no excuse, no explaining away what happened to these children. The priests involved had the duty to be their spiritual fathers and they failed.”

Check out Joanne’s blog, and read full details at the Los Angeles Times.

I can’t recall a time a sitting archbishop has taken steps like this to effectively and officially remove from public life his predecessor—especially one as prominent as Mahony.

UPDATE: From Rocco, who has a lengthy analysis:

While a sitting archbishop may make any request he wishes on the extent of his cardinal-predecessor’s role and public presence, it technically has no bearing on anything whatsoever. By the provisions of canon law, the universal faculties granted every member of the College, or any limitation of them in specific instances, rest solely within the competence of the Holy See. Ergo, barring an explicit papal move restricting his de iure perks, Mahony retains his seat in a Conclave to elect the next Pope until his 80th birthday in 2016, and all the other prerogatives that come with the “red hat” for life.

Likewise, Curry’s departure as regional bishop for Santa Barbara has no legal impact on his standing in active ministry – only the 70 year-old prelate’s resignation submitted to Rome, and its acceptance by the Pope, can officially end his ministry as an auxiliary bishop of Los Angeles.

Gomez being Gomez, however, it is distinctly unlikely that either of tonight’s moves were taken lacking some sort of consultation with the Vatican, whether directly or by means of the Nunciature in Washington. Given that sense, their public release would thus signal an implicit Roman green-light…