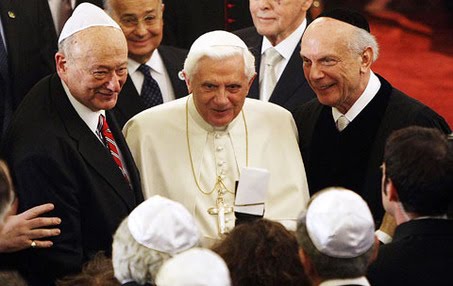 He was a New York original—almost as iconic as the Empire State Building—and he has the unusual distinction of being the only mayor to co-write a bestselling book with a cardinal.

Among other things, he had a deep affection for the Catholic Church, and developed a close friendship and collaboration with another New York fixture, Cardinal John O’Connor.  Ed Koch wrote about it for First Things in 2010:

We began the practice of having about six dinners or breakfasts together a year, during which we would discuss a host of subjects. Half of them took place at his residence and half at the Mayor’s official residence, Gracie Mansion. The Church was delivering social services under contract with the City, as it had done for generations. Without in any way diminishing the value of civil servants, I said many times that those affiliated with the Catholic Church working to provide services for the poor, the homeless, the sick, single mothers, abused women and orphans with the additional element of religious belief and answering a call to duty, could and would provide an extra dimension of comfort. 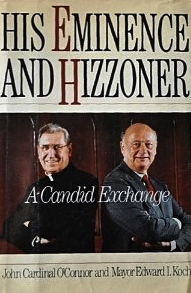 During a breakfast at his residence, he said to me, “We should write a book together.” I replied, “I’d love to,” and we did. The title is His Eminence and Hizzoner. We gave our respective advance of $100,000 each to charities or non-profits. His Eminence gave his to Catholic Charities, and I gave mine to city agencies like WNYC, etc.

The Cardinal’s awareness of when I was worried or distressed was exhibited on another occasion. During my third term, corruption in city government was uncovered involving the Queens Borough President Donald Manes and the Bronx Democratic County Leader. Although I had no prior knowledge of their corrupt acts, I fell into a state of severe depression. I did not feel that I could talk to anyone about my feelings or ask anyone for help. I didn’t think it would be helpful to have the people of this city worried that their mayor was incapacitated.

Cardinal O’Connor knew instinctively how I felt. He called me on a Sunday morning and said, “Ed, I know you are depressed. You need not be. Everyone knows you are an honest man.” I replied, “Your Eminence, I can’t tell you how much this call means to me.” He said, “It’s nothing.” I replied, “Your Eminence, it’s everything. The Lubavitcher Rebbe didn’t call me; you did.”

One final anecdote: The night I lost the Democratic primary to David Dinkins, I returned to Gracie Mansion at midnight. About 15 minutes later there was a knock on the door. The police officer at the front gate did not call ahead to let me know that someone had arrived. I opened the door and there stood the Cardinal. The Cardinal said, “Ed, this is not the end of our friendship. I want us to continue with our breakfasts and dinners. We will always be good friends.” We did resume those meetings, our friendship continued, and I went to Midnight Mass on Christmas Eve as I had done for nearly forty years.

I loved John Cardinal O’Connor as I did my own flesh-and-blood brother, Harold. On my desk I keep the Mass card from his funeral. Whenever I feel down, I look at his photo, and I’m energized. I was fortunate to have him as my friend for so long and look forward to continuing that friendship in the hereafter, which draws closer every day.

February 1, 2013 "Cardinal Mahony's La Cosa Nostra"
Browse Our Archives
get the latest from
Catholic
Sign up for our newsletter
POPULAR AT PATHEOS Catholic
1