That’s the stinging title of this piece from Real Clear Religion by George Neumayr (h/t New Advent) that bears reading this morning, as the aftershocks of yesterday’s temblor continue to shake Los Angeles. 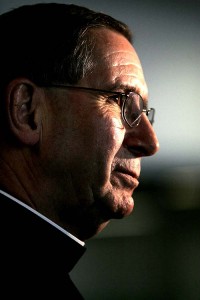 Referring to [Boston’s Cardinal] Law, Cardinal Mahony piously told the press that “he would find it difficult to walk down an aisle in church if he had been guilty of gross negligence.”

Meanwhile, Cardinal Mahony was unleashing his attack dogs on anyone who probed his staggering negligence. Until the media furor of 2001, he had been planning on making a pedophile long known to him and residing in his living quarters, Father Carl Sutphin (with whom he had gone to seminary), associate pastor of the archdiocesan cathedral. “I can’t believe a cardinal keeps a pedophile on staff,” said one of Sutphin’s victims.

Long before Leon Panetta joined the Obama administration as CIA director, he had scented out Cardinal Mahony’s misdeeds. He “has done tremendous damage to his reputation and the archdiocese,” said Panetta after his spell as a member of the National Review Board, a watchdog group formed in the wake of the scandal. Panetta recalled a meeting at which Cardinal Mahony turned up with “more lawyers in the room than I’ve ever seen.”

After Cardinal Mahony helped orchestrate the ousting of former Oklahoma Governor Frank Keating from the chairmanship of the National Review Board, Keating complained to the press that the cardinal had kneecapped him, likening his vicious behavior to that of “La Cosa Nostra.”

Throughout the abuse scandal, Cardinal Mahony has cast himself as a “naïve” waif, guilty not of a cover-up but of mere cluelessness. The recently released files explode that claim. He knew perfectly well that he was hiding criminals. “I believe that if Monsignor [Peter] Garcia were to reappear here within the archdiocese we might very well have some type of legal action filed in both the criminal and civil sectors,” he wrote to the director of a New Mexico treatment center, asking him to keep the fugitive from justice holed up there.

Read it all.  It helps put last night’s seismic event in LA in context.

February 1, 2013 Sanctuary: San Francisco church opens its pews to the homeless
Browse Our Archives
get the latest from
Catholic
Sign up for our newsletter
POPULAR AT PATHEOS Catholic
1