Catholic hospital facing suit argues fetus is not a person

Details, from the Colorado Independent: 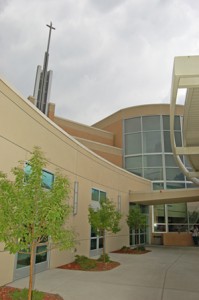 Lori Stodghill was 31-years old, seven-months pregnant with twin boys and feeling sick when she arrived at St. Thomas More hospital in Cañon City on New Year’s Day 2006. She was vomiting and short of breath and she passed out as she was being wheeled into an examination room. Medical staff tried to resuscitate her but, as became clear only later, a main artery feeding her lungs was clogged and the clog led to a massive heart attack. Stodghill’s obstetrician, Dr. Pelham Staples, who also happened to be the obstetrician on call for emergencies that night, never answered a page. His patient died at the hospital less than an hour after she arrived and her twins died in her womb.

In the aftermath of the tragedy, Stodghill’s husband Jeremy, a prison guard, filed a wrongful-death lawsuit on behalf of himself and the couple’s then-two-year-old daughter Elizabeth. Staples should have made it to the hospital, his lawyers argued, or at least instructed the frantic emergency room staff to perform a caesarian-section. The procedure likely would not have saved the mother, a testifying expert said, but it may have saved the twins.

The lead defendant in the case is Catholic Health Initiatives, the Englewood-based nonprofit that runs St. Thomas More Hospital as well as roughly 170 other health facilities in 17 states. Last year, the hospital chain reported national assets of $15 billion. The organization’s mission, according to its promotional literature, is to “nurture the healing ministry of the Church” and to be guided by “fidelity to the Gospel.” Toward those ends, Catholic Health facilities seek to follow the Ethical and Religious Directives of the Catholic Church authored by the U.S. Conference of Catholic Bishops. Those rules have stirred controversy for decades, mainly for forbidding non-natural birth control and abortions. “Catholic health care ministry witnesses to the sanctity of life ‘from the moment of conception until death,’” the directives state. “The Church’s defense of life encompasses the unborn.”

But when it came to mounting a defense in the Stodghill case, Catholic Health’s lawyers effectively turned the Church directives on their head. Catholic organizations have for decades fought to change federal and state laws that fail to protect “unborn persons,” and Catholic Health’s lawyers in this case had the chance to set precedent bolstering anti-abortion legal arguments. Instead, they are arguing state law protects doctors from liability concerning unborn fetuses on grounds that those fetuses are not persons with legal rights.

January 23, 2013
Amazing: five sisters who were Sisters—and two of them died just a day apart
Next Post

January 24, 2013 Looking at your computer screen and seeing the "kindly light of faith"
Browse Our Archives
get the latest from
Catholic
Sign up for our newsletter
POPULAR AT PATHEOS Catholic
1

Doctors, Medicine And The Common Good
There are many doctors who have been recognized as saints; tradition suggests...
view all Catholic blogs
Copyright 2008-2021, Patheos. All rights reserved.