A Connecticut priest was part of a cross-country drug ring that smuggled crystal meth from California into the well-heeled hamlets of Fairfield County, federal prosecutors said. 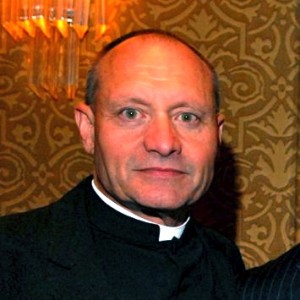 The 61-year-old former church leader and four others were indicted by a grand jury on six counts of possession with intent to distribute.

If convicted, he could face up to 20 years in prison and a $2 million fine.

The Diocese of Bridgeport expressed “shock” at the news, saying many in Fairfield County regarded him as “a gifted, accomplished and compassionate priest,” according to a statement.

Wallin stepped down from his post as pastor in June 2011, citing health and personal issues, church officials said.

A month later, he was granted a sabbatical from the church and soon fell out of touch.

“During his sabbatical, the Diocese became concerned about Msgr. Wallin’s well-being and has reached out to him,” the diocese said in a statement. “To date, he has not spoken directly with diocesan officials.”

He was stripped of his preaching faculties in May, the diocese said.

“The Diocese stands ready to help as it has throughout the past two years,” the statement said. “We ask for prayers for Msgr. Wallin during the difficult days ahead for him.”

UPDATE: Yesterday, a few people in my office wondered if there was more to this story.  Turns out, there is:

The Catholic priest indicted by a federal grand jury in an alleged nationwide methamphetamine ring was reportedly suspended after Connecticut church officials discovered he was a cross-dresser who was having sex in the rectory at Bridgeport’s St. Augustine Cathedral.

The Connecticut Post reports that Monsignor Kevin Wallin was relieved of his duties in May, but the Roman Catholic Diocese of Bridgeport continued to pay the 61-year-old man a stipend until his Jan. 3 arrest. Wallin had planned to fly to London that day, the newspaper reports.

At one point, Wallin, who is now dubbed “Msgr. Meth” by some, was selling upwards of $9,000 of meth a week, including shipments from Connecticut to California, according to his indictment.

In his post-priesthood life, Wallin, of Waterbury, purchased an adult specialty and video store in North Haven called Land of Oz that sold sex toys and adult videos.  Investigators believe the shop helped him launder thousands of dollars in weekly profits, the newspaper reports.

Wallin’s arrest shocked residents throughout Bridgeport and Danbury, where he was known as a charismatic speaker who was involved in many charitable activities. He often attended musicals with his mentor, former New York Cardinal Edward Egan and parishioners.

“There is an evil invading our world and it has come to our church,” longtime St. Augstine parishioner Maria Spencer-Fonseca told the newspaper. “This was a work of evil — and I am praying for the monsignor.”

January 17, 2013
Forgive us our debts: religious aspirants learn how to pay off student loans
Next Post

January 17, 2013 In a rare move, lay woman named as co-director of diaconate formation
Browse Our Archives
get the latest from
Catholic
Sign up for our newsletter
POPULAR AT PATHEOS Catholic
1

What are people starving for, Fr....
Catholic Bard
Books by This Author Books by Deacon Greg Kandra