Engaging the opposition: Cardinal Dolan shows how it’s done in his letter to Governor Cuomo 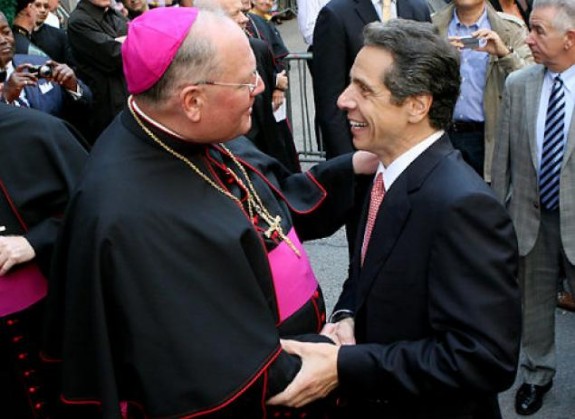 With a grateful h/t to my blog neighbor Frank, here’s the text of the letter from Cardinal Timothy Dolan to New York’s Governor Andrew Cuomo, following Cuomo’s “State of the State” message.

Congratulations on your third State of the State message earlier today. There is much to cheer in your report, and my brother bishops and I look forward to working with you to advance much of this agenda.

In particular, we share your absolute horror at the many incidents of gun violence that have had such a terrible impact on our society, none more so than the unspeakable massacre of 26 innocent children and women at Sandy Hook Elementary School on December 14. We commit ourselves to working with you to address this urgent problem as you look toward meaningful reforms of our gun laws, improvements in care for the mentally ill, and safer schools.

Allow me also to single out for praise your continued interest in reforming and improving our state’s health care system, as well as your support for a long-overdue increase in the state’s minimum wage. I am hopeful that real progress can be made in these and other areas that enhance the lives of those who are living below or near the poverty level in our state.

Yes, there is much to praise. However, I would be remiss if I did not renew my great disappointment regarding your continued support for the radical Reproductive Health Act. I know that you appreciate the fact that millions of New Yorkers of all faiths, or none at all, share a deep respect for all human life from conception to natural death. I also know that you are aware that New York State’s abortion rate is, incredibly, double the national average. Sadly, nearly 4 in 10 pregnancies statewide end in abortion. In some parts of New York City, the rate is higher than 60 percent, mostly in the impoverished Black and Latino communities.

As we have discussed in the past, we obviously disagree on the question of the legality of abortion, but surely we are in equally strong agreement that the abortion rate in New York is tragically high. There was a time when abortion supporters claimed they wanted to make abortion “safe, legal, and rare.” Yet this measure is specifically designed to expand access to abortion, and therefore to increase the abortion rate. I am hard pressed to think of a piece of legislation that is less needed or more harmful than this one.

I do hope you will reconsider this position. I stand ready and eager to discuss this or any other matter with you at any time. My brother bishops and I would very much like to work closely with you to reduce New York’s scandalous abortion rate and to provide an environment for all women and girls in which they are not made to feel as though their only alternative is to abort, something which goes against all human instinct, and which all too often leads to lifelong feelings of regret, guilt and pain for them, and for the baby’s father as well.

I look forward to discussing all of these issues with you further when I visit Albany on March 19 and 20 for the New York State Catholic Conference’s Catholics at the Capitol event.

Wishing you and your family every blessing in the New Year, may I remain

January 9, 2013
Was Don Bosco rolling over in his casket?
Next Post