From the St. Louis Post-Dispatch:

Say so long soon to Colleen Carroll Campbell, former Post-Dispatch staffer, who is moving to Washington to anchor a daily program on EWTN. 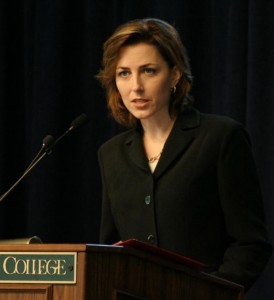 Campbell will be moving from Kirkwood for the new assignment. The show — logically labeled “EWTN Daily News with Colleen Carol Campbell” — is slated to debut June 3.

“We’re hoping the show will be a serious player on the international as well as national media scene,” she said.

The new gig requires Campbell’s hubby, Dr. John Campbell, to ankle his post as chief of geriatrics at Mercy Hospital in Creve Coeur.

Campbell worked at the P-D from 1997 to 2002, and later spent a year as a speechwriter for President George W. Bush. Her “op-ed” column ran in the newspaper from 2007 to last year. She is the author of two books on religion and has already been hosting an interview show on EWTN, a worlwide Catholic media network.

January 29, 2013
Maronite patriarch will compose text for Way of the Cross
Next Post

January 29, 2013 How married priests live—UPDATED
Browse Our Archives
Follow Us!

Official Catholic Church Teaching on the Inherent, Grave...
This is a list of resources for those seeking to understand more...
view all Catholic blogs
Copyright 2008-2020, Patheos. All rights reserved.