Catholic school enacts a “no swearing pledge”…but only for girls 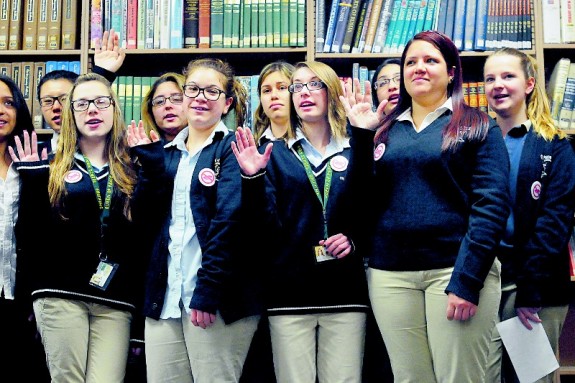 Catholic school girls think it’s just plain sexist that they were asked to take a no-cursing pledge on Friday — and the boys weren’t.

What the hell is up with that?

Lori Flynn, a teacher who launched the civility campaign at Queen of Peace High School inNorth Arlington, said the rationale was simple: “We want ladies to act like ladies.”

And besides, the principal, Brother Larry Lavallee, added, the girls have the foulest language.

That’s bull, according to an unscientific sampling of students of both genders who were hanging out in the hallways before the morning ceremony. Research by psychologist Timothy Jay, a professor at Massachusetts College of Liberal Arts and author of “Why We Curse,” backs the view that men are typically more profane. In general, people who are more extroverted, dominant and hostile tend to swear more.

Yet, despite their annoyance at what they said was a clear double standard, many girls were game.

Cursing is “part of everyone’s vocabulary but it doesn’t make you look educated,” said Kathleen McLaren, 17.

The pledge is a “good idea,” said Kaitlin McEnery, 16. “But putting it into action is the problem.”

One girl was horrified when she blurted out a common anatomical vulgarism a mere three minutes before taking the oath because a friend shoved a peeled orange in her face.

“It’s unattractive when girls have potty mouths,” noted Nicholas Recarte, 16. A pitcher on the school’s baseball team, Nicholas said he can’t help shouting obscenities from the mound after mishaps. He said he didn’t expect that to change.

“We all get road rage,” added Bobby Keegan, 17, a new driver. “But I will try to cut down a little. I’m respectful. And chivalrous.”

February 3, 2013 Shop pulls "Virgin Mary crisps" after complaints
Browse Our Archives
get the latest from
Catholic
Sign up for our newsletter
POPULAR AT PATHEOS Catholic
1