The cardinal strikes back: Mahony publishes private letter to Gomez 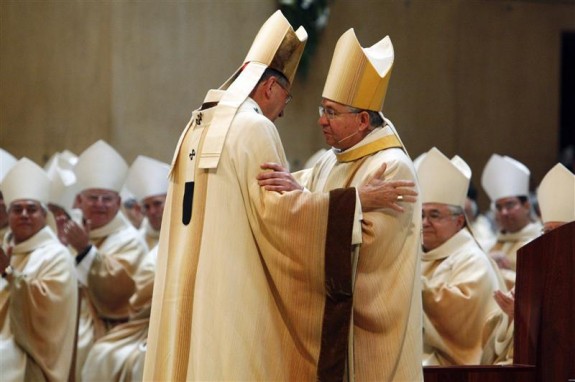 This afternoon, Cardinal Roger Mahony posted the following on his blog:

This morning I sent this letter to Archbishop Jose H. Gomez giving the history and context of what we have been through since the mid-1980s.  There is nothing confidential in my letter.   I have been encouraged by others to publish it, so I am do so on my personal Blog.  I hope you find it useful.

In this letter I wish to outline briefly how the Archdiocese of Los Angeles and I responded to the evolving scandal of clergy sexual misconduct, especially involving minors.

Nothing in my own background or education equipped me to deal with this grave problem.  In two years [1962—1964] spent in graduate school earning a Master’s Degree in Social Work, no textbook and no lecture ever referred to the sexual abuse of children.  While there was some information dealing with child neglect, sexual abuse was never discussed.

Shortly after I was installed on September 5, 1985 I took steps to create an Office of the Vicar for the Clergy so that all our efforts in helping our priests could be located in one place.  In the summer of 1986 I invited an attorney-friend from Stockton to address our priests during our annual retreat at St. John’s Seminary on the topic of the sexual abuse of minors. Towards the end of 1986 work began with the Council of Priests to develop policies and procedures to guide all of us in dealing with allegations of sexual misconduct.  Those underwent much review across the Archdiocese, and were adopted in 1989.

During these intervening years a small number of cases did arise.  I sought advice from several other Bishops across the country, including Cardinal John O’Connor of New York, Cardinal Joseph Bernardin of Chicago, and then Bishop Adam Maida of Green Bay.  I consulted with our Episcopal Conference frequently.  All the advice was to remove priests from active ministry if there was reasonable suspicion that abuse had occurred, and then refer them to one of the several residential treatment centers across the country for evaluation and recommendation.

This procedure was standard across the country for all Arch/Dioceses, for School Districts, for other Churches, and for all Youth Organizations that dealt with minors.  We were never told that, in fact, following these procedures was not effective, and that perpetrators were incapable of being treated in such a way that they could safely pursue priestly ministry.

During the 1990s our own policies and procedures evolved and became more stringent.  We had learned from the mistakes of the 1980s and the new procedures reflected this change.  In 1994 we became one of the first Archdioceses in the world to institute a Sexual Abuse Advisory Board [SAAB] which gave helpful insights and recommendations to the Vicar for the Clergy on how to deal with these cases.  Through the help of this Board, we moved towards a “zero tolerance” policy for clergy who had allegations against them which had proven true.

In 2002 we greatly expanded the SAAB group into the new Clergy Misconduct Oversight Board.  They were instrumental in implementing theCharter for the Protection of Children and Youth and served as an invaluable body for me and our Archdiocese.  They dealt with every case with great care, justice, and concern for our youth.

From 2003 to 2012 the Archdiocese underwent several Compliance Audits by professional firms retained for this purpose.  Most Auditors were retired FBI agents, and extremely competent.  Every single Audit concluded that the Archdiocese was in full compliance with the Charter.

When you were formally received as our Archbishop on May 26, 2010, you began to become aware of all that had been done here over the years for the protection of children and youth.  You became our official Archbishop on March 1, 2011 and you were personally involved with the Compliance Audit of 2012—again, in which we were deemed to be in full compliance.

Not once over these past years did you ever raise any questions about our policies, practices, or procedures in dealing with the problem of clergy sexual misconduct involving minors.

I have stated time and time again that I made mistakes, especially in the mid-1980s.  I apologized for those mistakes, and committed myself to make certain that the Archdiocese was safe for everyone.

Unfortunately, I cannot return now to the 1980s and reverse actions and decisions made then.  But when I retired as the active Archbishop, I handed over to you an Archdiocese that was second to none in protecting children and youth.

With every best wish, I am
Sincerely yours in Christ,
His Eminence

February 2, 2013 Like the Latin Mass? You'll love this.
Browse Our Archives
get the latest from
Catholic
Sign up for our newsletter
POPULAR AT PATHEOS Catholic
1