A great story of Jorge Bergoglio and a poor widow who wanted her children baptized March 17, 2013 Deacon Greg Kandra 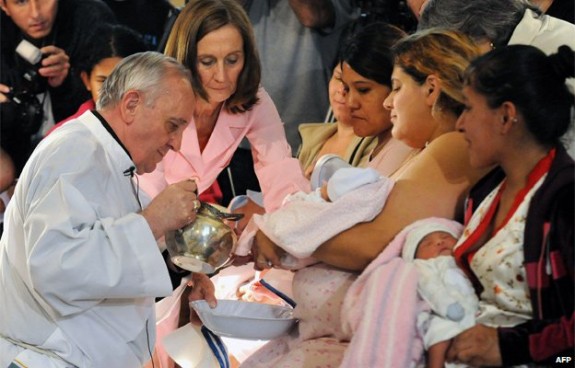 A revealing anecdote from an interview in 2009 with the man who would become Pope Francis:

Just a few days ago I baptized seven children of a woman on her own, a poor widow, who works as a maid and she had had them from two different men. I met her last year at the Feast of San Cayetano. She’d said: Father, I’m in mortal sin, I have seven children and I’ve never had them baptized. It had happened because she had no money to bring the godparents from a distance, or to pay for the party, because she always had to work.

I suggested we meet, to talk about it. We spoke on the phone, she came to see me, told me that she could never find all the godparents and get them together … In the end I said: let’s do everything with only two godparents, representing the others. They all came here and after a little catechesis I baptized them in the chapel of the archbishopric. After the ceremony we had a little refreshment. A coca cola and sandwiches.

She told me: “Father, I can’t believe it, you make me feel important.”

I replied: “But lady, where do I come in?  It’s Jesus who makes you important.”

Read more of the interview.

March 17, 2013 Pope Francis preaches mercy in Sunday homily
Browse Our Archives
get the latest from
Catholic
Sign up for our newsletter
POPULAR AT PATHEOS Catholic
1