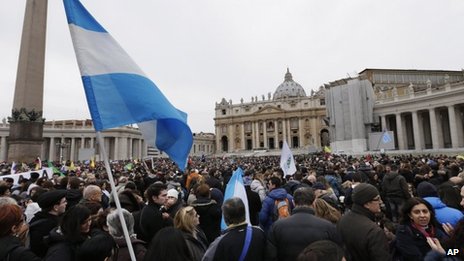 Pope Francis is celebrating Sunday Mass in the parish church of Vatican City, dedicated to St. Anne, the mother of Our Lady. The choir intoned the Attende, Domine! at the entrance, and the readings were those of the fifth Sunday of Lent: from the prophet, Isaiah; Psalm 126 – the Lord has done great things for us; the Letter of St Paul the Apostle to the Philippians; and a reading from the Gospel according to St John, in which the woman caught in adultery and subject under law to death by stoning, is presented to Jesus for judgment, and he says, “Let the one among you who is without sin be the first to cast his stone.” “He has come for us,” said Pope Francis in his homily, “when we recognize that we are sinners.”

Mercy, in fact, was the key lesson and the Good News proclaimed this Sunday. “Mercy,” said Pope Francis, “is the Lord’s most powerful message.” Speaking without a prepared text, Pope Francis said, “If we are like the Pharisee before the altar, [who said], ‘Thank you, Lord, for not making me like all the other men, and especially not like that fellow at the door, like that publican…,’ well, then we do not know the heart of the Lord, and we shall not ever have the joy of feeling this mercy.”

Pope Francis went on to say, “It is not easy trust oneself to the mercy of God, because [His mercy] is an unfathomable abyss – but we must do it!” Pope Francis continued, “He has the ability to forget, [which is] special: He forgets [our sins], He kisses you, He embraces you, and He says to you, ‘Neither do I condemn you. Go, and from now, on, sin no more.’ Only that counsel does He give you.” Pope Francis concluded, saying, “We ask for the grace of never tiring of asking pardon, for He never tires of pardoning.”

March 17, 2013
A great story of Jorge Bergoglio and a poor widow who wanted her children baptized
Next Post

March 17, 2013 Did Benedict suspect Bergoglio would be the next pope?
Browse Our Archives
Related posts from The Deacon's Bench