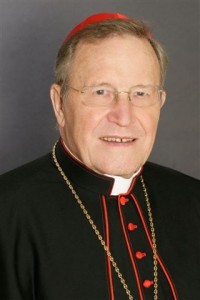 A diaconate for women should be considered as a new role for women in the church. Cardinal Walter Kasper made this proposal during a study day discussing how to involve more women in church life, convened as part of the spring assembly of the German Bishops Conference in the city of Trier, in western Germany, on Feb. 21.

Kasper spoke of a “deaconess” role that would be different from the classic deacon but could include pastoral, charitable, catechetical and special liturgical functions. The deaconess would not be designated through the sacrament of orders, but by a blessing.

Many women already perform the functions of a deacon, he argued, so as a practical matter the possibility cannot be ignored.

For those who are wondering (as I was): Kasper is 79.  He turns 80 next week.  According to the rules: “Those cardinals who celebrate their 80th birthday the day before the Apostolic See becomes vacant (due to the death or resignation of the reigning pope) do not participate in the election of the new pope.”

March 2, 2013 The peculiar Catholicism of Roger Ebert
Browse Our Archives
Follow Us!

Colbert and Tolkien vs. Trump
Catholic and Enjoying It!
Books by This Author Books by Deacon Greg Kandra