Could “The American Pope” become the next pope?

In a profile a couple years ago, “60 Minutes” famously referred to Cardinal Timothy Dolan as the “American Pope”  Now, veteran Vatican observer Sandro Magister is taking a serious look at the possibility that Dolan might become THE pope:

The mere hypothesis of the election of Dolan is fraught with terror. But Dolan as pope would also shake up that Church made up of bishops, priests, faithful who have never accepted the magisterium of Benedict XVI, his energetic return to the articles of the “Credo,” to the fundamentals of the Christian faith, to the sense of mystery in the liturgy. 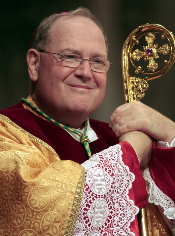 Dolan is, in doctrine, a dyed-in-the-wool Ratzingerian, and moreover with the gift of being a great communicator. But he is also this in his vision of man and of the world. And in the public role that the Church is called to carry out in society.

In the United States, he is at the head of that team of “affirmative” bishops who have marked the rebirth of the Catholic Church after decades of subjection to the dominant culture and of yielding to the spread of scandal.

In Europe and in North America, the regions of most ancient but declining Christianity, there does not exist today a Church more vital and resurgent than that of the United States. And also more free and critical with respect to worldly powers. The taboo has vanished of an American Catholic Church that identifies itself with the primary global superpower and therefore can never produce a pope.

On the contrary, what is astonishing about this conclave is that the United States offers not one, but even two true “papabili.” Because in addition to Dolan there is the archbishop of Boston, Sean Patrick O’Malley, 69, with the robe and beard of the worthy Capuchin friar.

His belonging to the humble order of St. Francis is not an obstacle to the papacy, nor is it without illustrious precedents, because the great Julius II, the pope of Michelangelo and Raphael, was also a Franciscan.

But what matters most is that Dolan and O’Malley are not two candidates opposed to one another. The vote of the one could converge upon the other, if necessary, because both are bearers of a single plan…

…Cardinal O’Malley speaks perfect Spanish and Portuguese and has always had as his preeminent activity the pastoral care of Hispanic immigrants. Cardinal Dolan is the head of the bishops of a country that has caught up to the Philippines in third place in the world for the number of Catholics, after Brazil and Mexico. And one third of the faithful of the United States are “Latinos,” and already half among those under the age of 40.

It is no surprise that the cardinals of Latin America should be ready to vote for these confrères of theirs from the north. And together with them other influential cardinals like the Italian Angelo Scola, the archbishop of Paris André Vingt-Trois, the Australian George Pell.

With the doors of the conclave closed, in the first scrutiny many votes could already fall upon Dolan, perhaps not the 47 of Ratzinger in the first vote of 2005, but still quite a few.

What comes next is unknown.

March 7, 2013
And now, a Village People jingle to back Cardinal Tagle for pope...
Next Post