Dolan: “Sometimes, the Church has got to be out of touch…” 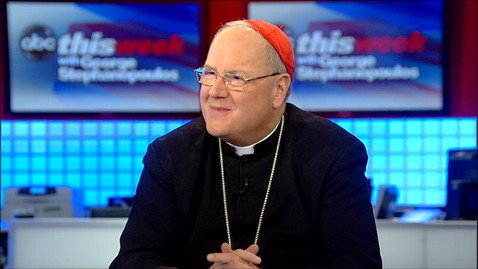 During an interview for “This Week,” Archbishop of New York Cardinal Timothy Dolan told ABC News’ George Stephanopoulos that the Catholic Church’s very nature means it will be — from time to time – out of touch with the concerns of its followers.

“Sometimes by nature, the Church has got to be out of touch with concerns, because we’re always supposed to be thinking of the beyond, the eternal, the changeless,” Dolan said. “Our major challenge is to continue in a credible way to present the eternal concerns to people in a timeless attractive way. And sometimes there is a disconnect – between what they’re going through and what Jesus and his Church is teaching.  And that’s a challenge for us.”

Dolan was responding to a question from Stephanopoulos about a recent ABC News/Washington Post poll, which found that 60 percent of Catholics “describe the church as ‘out of touch’ with the views of Catholics in America.”

As much of the country celebrates the Christian holiday of Easter, Stephanopoulos asked Dolan about the rise of people with no religious affiliation and if the church can bring people back toward God.

“What I’m afraid is that that’s afflicting society in general. That’s afflicting families. That’s afflicting — communities.  People want privacy.  People crave isolation.  We’re hearing parents say that they can’t even get their kids to talk anymore,” he said. “They’re – they’re tweeting one another.  So, this – kinda this craving of individualism, being alone, be – aloofness, that’s afflicting all of culture, all of society. We’re feeling it in the Church, too, because we’re not about ‘me.’  We’re about ‘us.’ We’re about the ‘our.’  We say ‘Our Father.’ But society is saying, ‘It’s me, myself and I.’”

Stephanopoulos also asked Dolan what the Catholic Church can say to gays and lesbians, who feel unwelcomed by the Church, which does not support same-sex marriage.

“Well, the first thing I’d say to them is, ‘I love you, too.  And God loves you.  And you are made in God’s image and likeness.  And – and we – we want your happiness.  But – and you’re entitled to friendship.’  But we also know that God has told us that the way to happiness, that – especially when it comes to sexual love – that is intended only for a man and woman in marriage, where children can come about naturally,” Dolan said. “We got to be – we got to do better to see that our defense of marriage is not reduced to an attack on gay people.  And I admit, we haven’t been too good at that.  We try our darndest to make sure we’re not an anti-anybody.”

March 31, 2013 Easter 2013
Browse Our Archives
get the latest from
Catholic
Sign up for our newsletter
POPULAR AT PATHEOS Catholic
1