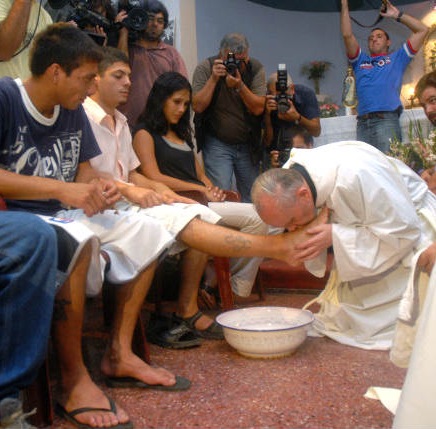 It was announced by the Holy See Press Office on Thursday that Pope Francis will celebrate the Holy Thursday Mass of the Lord’s Supper at the juvenile prison ‘Casal del Marmo’ in Rome, the same facility visited by Pope Benedict XVI in 2007. The Mass of the Lord’s Supper, which commemorates the institution of the Eucharist, also features the rite of the washing of the feet. In his ministry as Archbishop of Buenos Aires, Cardinal Bergoglio used to celebrate the Mass in a prison, hospital or hospice for poor and marginalized people. The other Holy Week celebrations are expected to follow the schedule already released by the Office for Liturgical Celebrations.

It’s unclear if this is unprecedented, but it is certainly a significant break from tradition.  John Thavis notes:

Traditionally, popes have celebrated this Mass, which commemorates the Last Supper, at the Basilica of St. John Lateran or St. Peter’s Basilica.

The pope will go to the “Castel del Marmo” Penal Institute for Minors on the outskirts of Rome for the evening Mass, where young men and women under the age of 21 are serving time.

The institute trains young inmates for employment in such areas as carpentry, tailoring and cooking, as well as a variety of artistic and technical sectors.

Another significant break from tradition will occur if the pontiff continues his practice in Buenos Aires and decides to wash the feet of women—an issue that often stirs debate in this country. (For more on that, check the USCCB website.)

UPDATE: CNS has some background on what Francis’ predecessors did:

At the start of his pontificate, Pope Benedict XVI reversed a 20-year Vatican tradition of washing the feet of priests during the Holy Thursday evening Mass. In 2006 and 2007, he returned to a practice in effect before 1985, when he washed the feet of 12 laymen from the Diocese of Rome during the evening Mass.

From 2008 onward, Pope Benedict switched back to washing the feet of 12 priests from the Rome diocese.

From 1985 to 2001, Blessed John Paul II washed the feet of 12 priests each year during the Holy Thursday Mass. Beginning in 2002, because of his weakened physical condition and his inability to walk, the pope had cardinals perform the foot-washing ritual, but always washing the feet of 12 priests.

However, in the first six years of his pontificate, Pope John Paul continued Pope Paul VI’s practice of washing the feet of laypeople.

For several years, Pope John Paul washed the feet of elderly laymen, including a group of homeless men living at a shelter run by the Missionaries of Charity in 1980. In 1983, he washed the feet of 12 young men from Italy’s Boys Town, and in 1984 the 12 were representatives of Rome parish youth groups.

Look.  I understand what Francis is doing here.  Fine.  But in making such a dramatic change, I fear that he runs the risk of making these change all about him, rather than some other message he wants to convey.  The same goes for all the other changes he is making.  The papacy isn’t just his own thing to do with what it pleaseth him to do.  The changes can become distractions, especially the way the media will handle them.

March 21, 2013 Vatican releases official photograph of Pope Francis
Browse Our Archives
get the latest from
Catholic
Sign up for our newsletter
POPULAR AT PATHEOS Catholic
1