The pope as CEO: a leading management consultant on Pope Francis’ leadership style 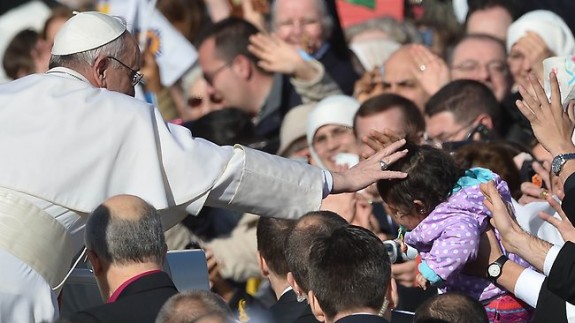 An alert reader sent this my way: it’s an e-mail from Patrick Lencioni, who runs The Table Group, a management consulting firm:

The Papacy is a singular, unique position, one that can’t really be compared to any other leadership role. Still, the events last week surrounding the election of Pope Francis brought to mind three surprising reminders of something I’ve written about before: the qualities of sacrifice, humility and selflessness that all true leaders must possess.

The first example has to do with the place where a new pope goes immediately after being elected. It is called The Room of Tears. As one website explained, the name stems from the idea that it is the place where “new popes have often been overcome with emotion at the thought of the heavy burden that has been given them.”

Now, we don’t generally imagine a newly hired or promoted CEO going into a room for solitary recollection or emotional processing, but it would make quite a bit of sense. After all, becoming the leader of any organization involves weighty discernment and great responsibility, or at least it should. What could be more appropriate than taking time to come to terms with all that? Perhaps all leaders should find their own Room of Tears after being hired or promoted.

Second, it was reported that Pope Francis, then Cardinal Bergolio, had stated before the Conclave started that he didn’t want to be elected Pope. His predecessor, Benedict XVI, made the same comment prior to his election in 2005, as have others. But one member of the media I saw, when told about Pope Francis’ comment, rolled his eyes and declared, “Well, he may have said it, but I’m not sure I believe it. I mean, can you imagine being the executive vice president of a company for many years and then saying that you didn’t want to be CEO?”

While being the Pope is certainly different from being a CEO or political leader – something that can be difficult for the media to completely understand – there is a lesson to be learned from the reporter’s comment. He was suggesting, or perhaps assuming, that leadership is something that comes about because of personal ambition and individual achievement, rather than humble service and acceptance of responsibility. I think it’s fair to say that this is how many, if not most, people see leadership.

Frankly, I think the world would be a better place if more of its leaders accepted responsibility reluctantly and humbly, rather than clamoring for it and for the accolades that come with it. This would go a long way toward shifting the emphasis of leadership away from leaders themselves and toward the people they serve.

I remember my high school history teacher, Mr. Fanucchi, making an interesting comment along these lines many years ago. “The only person who should be president of the United States,” he said, “is someone who doesn’t want to be.” That made sense to me then, and it still does. And it made perfect sense when Cardinal Bergolio said he didn’t want to be elected on the eve of becoming Pope Francis.

A final aspect of the Papal Conclave that made an impression on me is the way that all of the Cardinals immediately defer to their new leader, a man who, by definition, was one of their peers just moments before. It is often very difficult in organizations when a peer is suddenly elevated to a position of leadership, and I’ve never really understood why this seems so much easier for a new pope and his former peers.

And then the answer hit me, and it has everything to do with the first two points; the Cardinals don’t see the new Pope as having won a contest, but rather as accepting a daunting and overwhelming responsibility. One small but powerful example of the burden of becoming Pope is the fact that, after the Conclave, the other Cardinals left Rome to return to their respective homes, while Pope Francis stayed in Rome for good, without so much as a few days to go back, pack his things, and say goodbye to his friends and family and receive their congratulations and good wishes. Think about that. After spending his entire life in Argentina, he suddenly is faced with the fact that he will only return there in the event of a brief and official Papal visit sometime in the years to come.

And if that weren’t enough, consider that Pope Francis has asked his friends and colleagues from Argentina not to attend his inaugural Mass and ceremony in Rome, but rather to use the money that they would have spent on travel to attend to the poor. It’s hard to imagine a greater testimony to the fact that this man sees his role not as something to be celebrated so much as a duty to be humbly fulfilled.

March 20, 2013
As seminarian, Jorge Bergoglio struggled with celibacy
Next Post

March 20, 2013 "It's the pope on line 1..."
Browse Our Archives
get the latest from
Catholic
Sign up for our newsletter
POPULAR AT PATHEOS Catholic
1