From an interview the new pope gave last year: 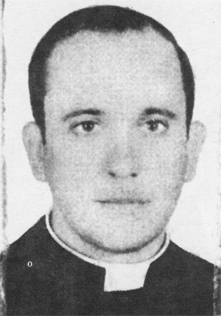 When I was a seminarian, I was dazzled by a girl I met at an uncle’s wedding. I was surprised by her beauty, her intellectual brilliance… and, well, I was bowled over for quite a while. I kept thinking and thinking about her. When I returned to the seminary after the wedding, I could not pray for over a week because when I tried to do so, the girl appeared in my head. I had to rethink what I was doing. I was still free because I was a seminarian, so I could have gone back home and that was it.  I had to think about my choice again. I chose again – or let myself be chosen by – the religious path. It would be abnormal for this kind of thing not to happen.

When this happens, one has to get one’s bearings again. It’s a matter of one choosing again or saying, “No, what I’m feeling is very beautiful. I am afraid I won’t be faithful to my commitment later on, so I’m leaving the seminary.” When something like this happens to a seminarian, I help him go in peace to be a good Christian and not a bad priest. In the Western Church to which I belong, priests cannot be married as in the Byzantine, Ukrainian, Russian or Greek Catholic Churches. In those Churches, the priests can be married, but the bishops have to be celibate. They are very good priests. Sometimes I joke with them and tell them that they have wives at home but they did not realize that they also got a mother-in-law as part of the bargain. In Western Catholicism, some organizations are pushing for more discussion about the issue. For now, the discipline of celibacy stands firm. Some say, with a certain pragmatism, that we are losing manpower. If, hypothetically, Western Catholicism were to review the issue of celibacy, I think it would do so for cultural reasons (as in the East), not so much as a universal option.

For the moment, I am in favor of maintaining celibacy, with all its pros and cons, because we have ten centuries of good experiences rather than failures. What happens is that the scandals have an immediate impact. Tradition has weight and validity. Catholic ministers chose celibacy little by little. Up until 1100, some chose it and some did not. After, the East followed the tradition of non-celibacy as personal choice, while the West went the opposite way. It is a matter of discipline, not of faith. It can change. Personally, it never crossed my mind to marry. But there are cases. Look at the case of the Paraguayan President Fernando Lugo. He’s a brilliant guy. But as a bishop, he had a fall and resigned from the diocese. This decision was honest. Sometimes we see priests fall into this.

Skorka: And what is your position?

Bergoglio: If one of them comes and tells me that he got a woman pregnant, I listen. I try to help him have peace and little by little I try to help him realize that the natural law takes priority over his priesthood. So, he has to leave the ministry and should take care of that child, even if he chooses not to marry that woman. For just as that child has the right to have a mother, he has a right to the face of a father. I commit myself to arranging all the paperwork for him in Rome, but he has to leave everything. Now, if a priest tells me he got excited and that he had a fall, I help him to get on track again. There are priests who get on track again and others who do not. Some, unfortunately, do not even tell the bishop.

Skorka: What does it mean to get back on track?

Bergoglio: To do penance, to keep their celibacy. The double life is no good for us. I don’t like it because it means building on falsehood. Sometimes I say: “If you can not overcome it, make your decision.”

Read the rest of the interview, where also emphasizes his own “zero tolerance” attitude toward sex abuse.

March 19, 2013
Would the US State Department consider "monitoring" the election of a pope?
Next Post

March 20, 2013 The pope as CEO: a leading management consultant on Pope Francis' leadership style
Browse Our Archives
get the latest from
Catholic
Sign up for our newsletter
POPULAR AT PATHEOS Catholic
1